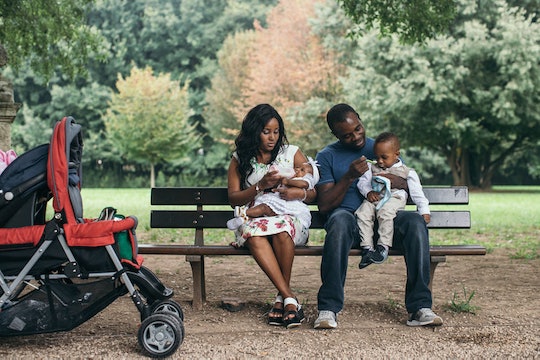 Deciding how many kids to have can be an emotional minefield for couples. When one partner wants more children and the other doesn't, he or she may feel like they need to choose between fulfilling their heart's desire, or blowing up their relationship. But the issue isn't always as straightforward as it seems on the surface, and doing some introspection can help couples work through the stalemate.

Figuring out how many children you each want is an issue that needs to be resolved as early as possible, according to licensed marriage and family therapist Wendy Hill. “Ideally this is something you talk about before you get married,” she says. “Finding the right person is not just about being in love and having a great partnership. It’s working toward the same life goals.” When those life goals don't include the same number of kids, conflict becomes inevitable.

Resolution to that conflict starts with an honest emotional assessment from both partners, Hill says. “The most productive conversation you can have about that is to talk to each other about your hopes and fears.” Partners who don't want to have any more kids will often point to issues like feeling too old to start over with a newborn, or worries over the added financial expense of expanding the family. While Hill says those can be completely valid concerns, something else is often in play. “There’s usually a fear underneath that, and it’s worth exploring what that fear is.” With a little probing, different reasons may start to emerge, such as feeling overwhelmed by family life already, or feeling like an inadequate parent to the children they already have.

On the flip side, the partner pushing for more kids should also examine their own motives. “If I want more kids," Hill says, "What is that I’m missing out on? What is it that I may need that I’m not getting fulfilled right now?” Hill says that if she's seen any pattern emerge in her years of practice, it's a feeling of being unloved. Partners who are dealing with their kids growing up and heading off to school may suddenly find themselves feel lonely, and like no one needs them — but another baby won't solve that particular problem. "You should never use a kid to meet your own needs," Hill says. “It’s worth exploring if there are other ways of getting the need met."

If you and your partner have drilled down to your true motivations behind having or not having another child and you're still at an impasse, Hill says couples therapy is the next logical step. She specifically recommends emotionally focused therapy (EFT), a form of therapy especially focuses on adult relationships and attachments, according to Psychology Today. As Dr. Jocelyn Charnas explained to She Knows, therapy can help you not only reach a decision, but also deal with the aftermath of that decision. Because having a baby is a yes or no proposition, there's not much room for compromise — and that can be hard to get over.

The biggest thing Hill warns against is either partner taking matters into their own hands, perhaps by conveniently forgetting to take a birth control pill or restock the condoms. Some resort to even more drastic measures. “I have had couples where he’s gone off and had a vasectomy in secret so that she can’t have any more children." Something like that can easily ruin a marriage. Writing for Goodtherapy.org, therapist Lindsey Antin also discourages partners from trying to bargain over the issue — a wife who promises to do all the childcare if she gets another baby, for example, could wind up burnt out and resentful.

Hill also urges couples to not let the impasse continue indefinitely. One partner's views on the topic can certainly evolve over time, but it's not something either one should bank on. If you let enough time pass, your window for having kids closes and biology simply decides the issue for you — but the emotional wound will still fester. “It sits in the marriage as kind of a betrayal," Hill says. "It does need to be healed properly.”

More Like This
Tips To Co-Parent With A Stepparent Successfully
How To Ask Your Partner For Support When You Need It
Ginger Zee Had A Perfect Response After A Troll Asked Her "Who's Raising Your Kids?"
It's A Beautiful Day In Jenny Slate’s Neighborhood