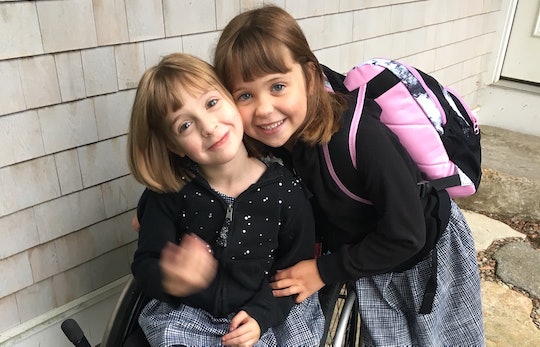 The Job Of The Other Sibling

What's hardest for me about being the parent of a child with a disability — more than all the doctor's appointments, therapy sessions, calls to insurance companies, forms to fill out, advocates to call, workshops to attend, everything else there is to do and all the things we cannot do because they’re too hard, not accessible, too time consuming, too expensive, that everyone else is out there doing all the time — is that I am also the parent of a neurotypical child.

When Thora was 4, I had a trophy made for her as a holiday gift. It said “Best Big Sister” on it. She was so proud to receive it. To this day, anytime anyone tells her what a wonderful big sister she is, she beams and replies, “I know. I got a trophy for it!” I am not bragging when I say that Thora is a fabulous big sister. She is the kind of kid you dream about. I can't take any credit for this; she just is who she is. She is bright, brave, and independent. She's creative, curious and inspired and she has a silly sense of humor. She loves to read, draw, paint and make things. She rides a bike and a skateboard and loves to Rollerblade. She bakes. Corn muffins are her specialty and she’s learned how to use our espresso maker to bring Johnny his coffee in the mornings. (I mean, what more could you ask for?) As her fifth birthday approached, she decided she wanted her ears pierced. I thought she was too young, but she convinced me she was ready. She dutifully cleaned her ears herself night and day for the next month. On her seventh birthday, she wrote me a two-page “persuasion” essay about why she was ready for a cat of her own... she got the cat. And she knows herself. She has her own style, makes up her own jokes. She is very, very concerned about the world, animals, the environment, her family and friends, and most of all, her little sister, Freyja.

Freyja’s disability is complex and not only physical. Sometimes she is easygoing and silly. Other times, her behavior is exhausting. Usually, even her sass is cute. But it can often be infuriating. She can be wildly inflexible, rigid, uncompromising. She will dig her heels in, furrow her brow and say no. I flush with anger and as I do, I remember her neurologist making predictions about her behavior and how to deal with it. "You're going to have to parent her differently than you do Thora," he advised me. "You're going to have to give in at times when it doesn't make sense." I had no idea what he meant until several visits later when some interesting behaviors and traits started to emerge. Her neurologist says we could see aspects of autism, ADD, ADHD, OCD, ODD, even psychosis. An alphabet soup of letters, but none that spell necessary treatment or medication for any of those issues. Just enough to be aware. "You will have to parent her differently. Take it as it comes."

Conversely, I am now realizing that I have to parent Thora differently, too.

I don't like that. I want things to be equitable. It would be so much easier to treat both of my children the same way, to hold them both accountable for their behavior in the same way, to proclaim that I don't see disability. But disability is there and it’s significant and that means Thora has a unique role as a big sister. It’s not only that there are things Freyja physically cannot do, it’s that her behavior often prevents Thora from doing them too.

She takes her sister to the bathroom without complaint, puts on her leg braces, braids her hair, helps her in and out of costumes when they play dress-up.

Thora is acutely aware of how much more is on her plate because she has an atypical sibling. While my husband is a stay-at-home parent to attend to our family’s significant needs, I travel frequently for work. With one income, we can’t afford to have a lot of help with childcare. We are both always overextended and tired. Like most 8-year-olds, Thora has chores. She feeds the cats, lets out the chickens, folds and puts away her laundry, buses her dishes. Unlike most 7-year-olds, Freyja has no chores. She likes to help in the kitchen, making more of a mess than anything else when she drops spices she tries to put away, loses her grip on a measuring cup full of flour trying to pour it into a mixing bowl, falls backwards trying to pull the refrigerator door open. She wants to feed herself, which is a painstaking activity in which she drops half of what she manages to get on her fork, knocks over her water cup at every meal and goes through half a dozen napkins at every meal.

Unlike most 8-year-olds, Thora does all her sister’s chores. She ends up fetching kitchen towels to wipe up her sister’s messes. She folds and puts away her sister’s laundry, because Freyja cannot. She takes her sister to the bathroom without complaint, puts on her leg braces, braids her hair, helps her in and out of costumes when they play dress-up. She even sacrifices reading Harry Potter in bed at night to read Marlon Bundo to Freyja 12 times in a row. She decided it was her responsibility to wheel her sister into her classroom every morning before heading for her own class. She shares, she teaches, she advises, and she often gets nothing in return. She is a truly loving and dedicated sister, and it’s a bittersweet thing to watch. I wish this were not necessity, but it is. We need her help.

I tell her over and over how I know that most 8-year-olds don’t have to do the things she does, how this is her job and it is the best job in the world and sometimes the hardest.

Thora doesn’t get a lot of one-on-one mama time but when she does, I try hard to make it quality time. We talk about all kinds of things: school, animals, bodies and sexuality, friends, politics. We make up stories, we play games. We talk about her sister. We talk about why Freyja is different and what that means for all of us, especially her. I tell her over and over how I know that most 8-year-olds don’t have to do the things she does, how this is her job and it is the best job in the world and sometimes the hardest. She takes these conversations very seriously, nodding gravely, accepting her role. I think about how I want to give her space to be herself and at the same time how someone will always need to put Freyja first, and one day it will be her in a way she can’t even imagine now.

I lie awake at night and think about how Thora should be doing more dance or soccer like her pals. How she should have more time to or read or practice guitar or go on play dates. She can't be on a team because the time commitment is too great for us, even though Freyja has speech therapy, occupational therapy, and physical therapy sessions every week after school that we never miss. She can’t go rollerblading or bike riding with me as often as she’d like because her sister invariably wants to come, which turns a simple family outing into an all-hands-on-deck adaptive event, unless we opt to risk a tantrum that could turn into a neurological event, or worse, a seizure. We can’t even go for a walk as a family unless Freyja agrees to use her wheelchair, because even short distances can be too fatiguing for her to walk. Every activity that should be easy and fun with two kids is extra work, and very often that extra work falls to Thora. I think about how even a simple checkup at the pediatrician feels exciting to Thora, that her pretend games often include needing a cast or a wheelchair or some intensive medication to treat an injury or disability. I am grateful to have one strong and healthy child who has never needed a medical intervention for anything, yet to her that’s unfair and nothing short of neglect because it means no doctors, no therapists, no evaluations, no special attention like her sister gets daily and has since her infancy.

When Thora behaves inappropriately, I always handle it the same way. We discuss it. There are explanations, there are tears, there are sometimes consequences, there are always hugs. When Freyja behaves inappropriately, I am not always so consistent. I decide how to respond depending on the situation, her emotional state, her level of hunger or fatigue, where we are (and, honestly, who’s watching). Often I drop the issue or just give in because we’re tired or in public or in a hurry or it’s just easier and I revisit it later, when Freyja can be more attentive. And Thora hates that. Feeling like her sister gets off the hook is the one thing that makes her consistently resentful, and I can see why.

My best moments as a special needs parent are when I'm thinking about both of my children, but too often it feels like an either/or situation. That’s hard on everyone and sends me to a place of overwhelm and resentment. Instead, I prefer to celebrate their individuality. I give them not only one-on-one attention but also individualized attention. That means I get up in the morning with Thora and we go for walks and bike rides while Freyja is still asleep. At night, I try to be patient as I read a book a dozen times in a row to Freyja so Thora can read her own book. Freyja is my food shopping buddy, and we like to sit at our local Whole Foods and sing songs from Really Rosie while I sip a nitro cold brew and she snacks on French fries. Thora and I write each other letters, make up stories together, have secret signals so I know when she’s OK and when she isn’t.

She tells me a hundred times a day, almost obsessively, that she loves me, clearly out of a need to be reminded that she, too, is loved. She needs extra — almost constant —hugs and snuggles, and will ask to be held at truly inconvenient times just because. In the moment, I am often irritated, put out. I have to tell myself what I truly believe, that it’s never a bad thing to show a child she is loved, and I open my arms. It's not much, and it doesn’t make life in our family equitable or fair or even fun, yet somehow, it’s enough.