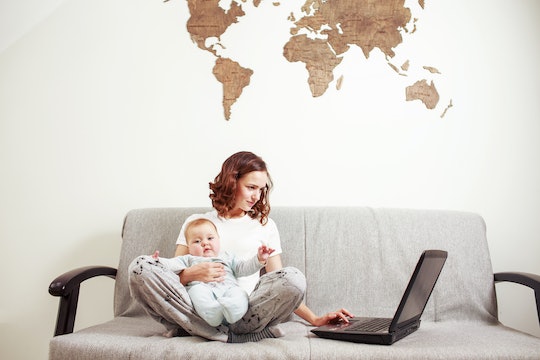 When Your Online Mom Community Collapses

Online communities might be accessed through apps on our phones, but they are as real as the communities our mothers relied on when they were raising us. As a new mom with three kids born in less than two years — a new mom drowning in my new role — I sought out these online mom communities with a robust passion.

Extroverted to a fault, as I often describe myself, my new role as a stay-at-home-mom chaffed around the edges a bit. The first online group I joined, when our first son was born, was related to a local new parent group I was in. Connected through a local hospital, most of the moms in the group had given birth there, but I was fully embraced as an adoptive mom. Nearly seven years ago, this concept seemed so new to many that our local paper even wrote about us. From there, I blossomed out into adoptive parenting groups, attachment parenting groups, fearless formula feeders, baby-wearing, on and on. With the addition of our twins to our family, I joined a slew of groups related to twin parenting, cerebral palsy (which my daughter was diagnosed with), transracial parenting, Black hair care, and general moms-losing-their-minds groups.

Most of these interactions and groups were healthy for me. I felt heard, validated, and supported, 24/7. Sometimes I even felt validated when I probably shouldn’t have — because you will always find someone to back you up online.

Three groups that I had a significant emotional investment in imploded.

I never bought a product without first asking my online mom community for their opinions (even though there was usually literally no consensus over any product). I brought my toughest parenting questions to these online friends, also. Sleepless nights, depression, marital strife brought on by the stress of so many little ones, and my concerns with doing my best job as an adoptive mama to these precious little ones entrusted to me. The online utopia of mommy camaraderie became addicting in a way. It felt safe.

Until it wasn’t. Inevitably, it seems, nearly every online community I was a part of blew up over some issue or another. Fault lines developed, and people chose sides. Groups were formed of the factions, and drama was taken to a whole new level. Sometimes, it was easy to laugh at the frivolity of it all. Are we really going to die on this hill here, of how we feed our babies? Are we really going to sit crying into our lukewarm coffee because someone said they would wear their baby facing frontward in a carrier? No, mamas, no. Pull yourselves together.

A few times, though, it was extremely hurtful to me, and I grieved a real loss in my life. Two groups that I had a significant emotional investment in imploded. A twin mom group that kept me sane during the first six months of multiple motherhood disintegrated over racist comments left unchecked. I was removed from a local progressive moms group over a mistake that I made, and then acknowledged and apologized for, then later attacked by some of the members; I cried for days. I worried about running into these women who were so furious at me around our city, and had a dozen women unfriend me without even a thought. Women I had trusted, who knew deep and hurtful parts of my journey. I thought of all my posts, shared in a group I no longer had access to. My “stuff” out there, for several hundred women to see. It was heartbreaking.

I still miss the support of that group, of the 99 percent of members who were genuine in their care of one another.

Through the loss of that group, though, I developed and strengthened some amazing real life friendships. Moms who supported me in my faux pas, offered grace, and met me for coffee or a park date to talk it out. Some left the group in solidarity or frustration, some left to try to work it out. A few confided in me that they wanted to leave and felt the environment was toxic, but were scared of backlash if they did so. I do not know what the right answer was. I know I still miss the support of that group, of the 99 percent of members who were genuine in their care of one another. I know I learned to be more cautious, to think before spilling my guts to online community, and to really be sure of who I trusted. A hard lesson to learn.

I still have mornings where a pressing question comes to my head, and I only remember when I go to my search bar and my group doesn’t show up, that I’ve lost this community.

In recent months, I have talked to a lot of moms who have been through similar situations. What is it about the anonymity of social media that can make moms be so vicious to one another? And what it is about us and our generation that puts our whole selves out there, for people we don’t really know, setting ourselves up for hurt? As with any change in the fabric of society, there are bumps to be ironed out, and boundaries we need to set for ourselves. Many other moms have learned the hard way, like me.

Despite all of this, I wouldn’t go back in time and avoid those online communities. I’ve connected with many wonderful friends, and had the privilege of meeting many of them in real life after an online introduction. I spent four days last summer on a girls’ trip to a conference with four other moms I met through online transracial adoption groups, and our friendships were as genuine in person as they had been through our phone screens. I’ve grown as a person as I learned about parenting from moms halfway around the world. I don't take that for granted.

I know to establish boundaries now, and to tread lightly. And for those of us who do still view the woman on the other end of that Facebook conversation about feeding or sleep-training or planning the July 4 pantomime as an adversary, I stress that before you cut her off from an online support system, you consider what you are taking away.

More Like This
The Euphoric Terror Of Rollerskating Was Exactly What I Needed
Stop Talking About Formula Feeding Like It’s Always A “Last Resort"
I Found Gender Euphoria In My Second Pregnancy
Ginger Zee Had A Perfect Response After A Troll Asked Her "Who's Raising Your Kids?"