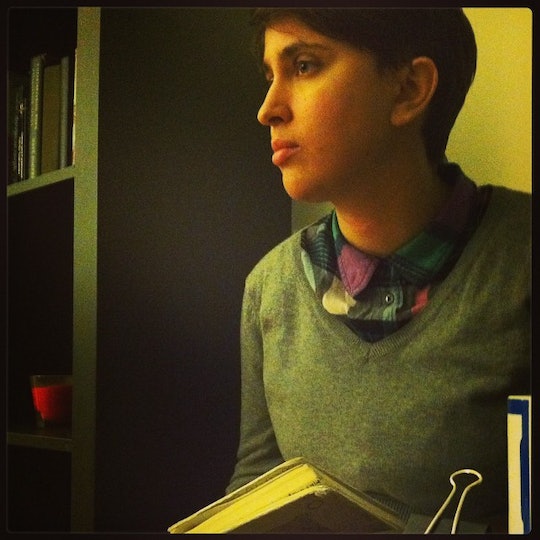 When You're A Birth Mother, There Is Literally No Pregnancy Advice That Acknowledges You

First of all, let’s talk about how hard it is to even find pregnancy advice that acknowledges that single mothers might exist, let alone finding pregnancy advice that acknowledges birth mothers exist. Did you know that freakin' 40 percent of children in the U.S. are born to single mothers? And yet all the pregnancy books I received were chock-full of advice about what to have “your man” do for you while you’re laid up incubating a little human. (I guess by that math that LGBTQIA+ mothers don’t exist, either?) But, let’s lay that aside for now. Let’s ignore the fact that the pregnancy advice market lacks sensitive, versatile advice for mothers in any partnership situation or no partnership situation at all. Even if that weren’t true, I have literally never found a single piece of pregnancy advice that accounted for the possibility that I might not be planning to raise my child.

The closest I’ve ever found was this girl’s guide to treating symptoms of unwanted pregnancy — a piece published on Jezebel that lists advice for pregnant women who are planning to get an abortion. But that piece still didn't speak to my personal experience; I’ve never once read pregnancy advice anywhere, in any context, that applied to birth mothers placing their kids for adoption and surrogates — women carrying infants to term but not taking them home with them. Women like me.

And look, I get it. It’s not a terribly common situation, and for good reason: domestic adoptions are increasingly rare, thanks to improved sex education, increased access to birth control, and a decreased stigma against “unwed mothers” (lack of pregnancy advice for them notwithstanding). But when every single piece of pregnancy advice you find takes it as a given that you’re about to start parenting, it wears on you. It gets old. It made me feel invisible, and worse, like I shouldn’t even exist. Like I was doing something so wrong and absurd that the possibility of my existence couldn't even be acknowledged.

When you’re pregnant and fumbling for information, and all the resources at your disposal refuse to so much as leave room for your existence, shame becomes hard to avoid.

Would it be so terrible to just keep pregnancy advice separate from “preparing to parent” advice, which, I’m sure, plenty of fathers would appreciate as well? Would it be awful to avoid gendered language that presupposes a child was conceived in the context of a committed, romantic, heterosexual relationship? What if, for those chores you’re not supposed to do when you’re pregnant, you just advised the pregnant person to “avoid doing these tasks,” or “find someone else to do them,” rather than, “Make your man clean out that kitty litter box! Stick your feet up, girl, you’ve earned it!” Every mother’s situation is different. Why would you want to alienate any of us?

All I wanted while I was pregnant was factually accurate, scientifically-based, practical, realistic advice that didn't make any assumptions about its audience. When none of the pregnancy advice I read fit that description, I kind of stopped looking. I figured, well, the human race hasn't gone extinct yet; my son and I will probably be fine. And, we were, but I shouldn't have felt so frustrated and invisible that I needed to tune out like that.

I’m proud of being a birth mother. I’m proud that I did what was best for my child (which happened to be what was best for me, too). I’m glad that my child is growing up in an amazing, financially stable household, where I get to see him often. I’m glad that he gets to have three loving parents doting on him. I’m not ashamed; or, rather, sometimes I’m ashamed, but I also know that my shame exists separately from the truth, and what I know to be right and good. I have no reason to feel shame. But when you’re pregnant and fumbling for information, and all the resources at your disposal refuse to so much as leave room for your existence, shame becomes hard to avoid.

I have felt the frustration of swallowing down pregnancy advice that pretended I didn't exist, and I feel your frustration, too. You are not alone.

This is part of why I tell my story so often. I want other women out there, even if their situation doesn't match mine exactly, to know that they're not alone. If you're a birth mother, if you're carrying a baby to term but your partner is raising him without you, if you know your baby won't live long but you're having her anyway so you can meet her, if you're a surrogate, if for whatever reason you are pregnant but are not going to be following a traditional parenting narrative after giving birth, I want you to know that I see you. I have felt the frustration of swallowing down pregnancy advice that pretended I didn't exist, and I feel your frustration, too. You are not alone. Your pregnancy matters and your story matters. The total absence of pregnancy advice that acknowledges you does not mean there is anything wrong with you. You are perfect and you deserve support. I see you. I see you. I see you.