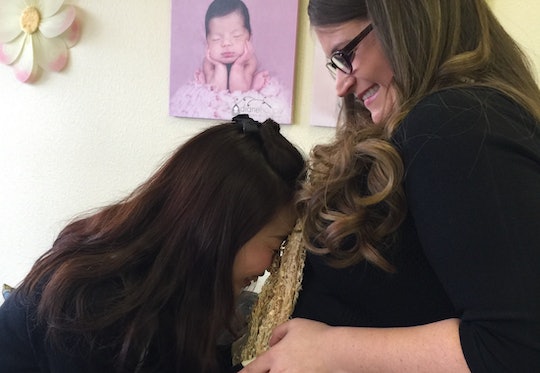 Recovering From Birth After Handing The Baby Over To Their Parents

When a gestational surrogate delivers a baby after ten months or so of carrying another person’s child, their job, so to speak, is done. With the baby safely in the hands of its parents, the story seems to be over, but for surrogate moms, that couldn't be further from the truth. For all information out there on gestational surrogacy, the postpartum period isn’t talked about much.

There are a lot of misconceptions around surrogacy; for starters, it’s important to understand the difference between traditional and gestational surrogacy. In traditional surrogacy, the surrogate uses her own eggs to create an embryo — she is genetically related to the baby, and this arrangement has become pretty rare in the U.S. for obvious legal reasons. In gestational surrogacy, there’s no genetic link — the intended parents are the ones to donate the egg and sperm in a process using in vitro fertilization.

Romper spoke with several women who have been through the process and were willing to share the honest truth of what life was like coming home from the hospital after having a surrogate baby. There were definitely highs and lows, but every woman we talked to said they wouldn’t change a thing.

Sarah Peterson has three kids of her own. She knew her family was complete, but she also knew she wasn’t done being pregnant. Becoming a gestational surrogate for another family seemed like the natural next step. She was working as a labor and delivery nurse when a long-time colleague started having fertility issues after her first child. One thing led to another and Peterson decided to start the process to become a surrogate for her friend.

“It ended up being a long process, but we finally did the transfer in July of last year,” she tells Romper, “This pregnancy was different than with my own kids. I had to get into a different mind-frame for it.”

Like Peterson, Karen Hoffenkamp had completed her family before deciding on becoming a gestational surrogate for another couple. She has four children, ranging in age from 3 to 13, and it was when she was pregnant with her fourth child that she learned about surrogacy. After the initial process, Hoffenkamp was matched with a couple from Japan and ended up carrying boy/girl twins for them.

To get in the right mindset for the pregnancy, she told herself she was simply carrying these babies for another couple. “They were never mine. I was just holding them for awhile,” she tells Romper.

Peterson delivered her surrogate baby this past April. She reports the first few days were great postpartum, with friends and family checking in.

“My sisters were really good about trying to get me out of the house, and my husband was super supportive. He made me food and let me sleep when I felt that I needed it.”

The weekend came and Peterson felt she had entered some level of “baby blues,” chalking it up to the shift in hormones. “There was so much communication happening and then suddenly it stopped.” The parents were great at checking in, especially because Peterson was anemic from blood loss during the birth. She ended up pumping milk for the baby for a month until the mom was able to induce lactation on her own. They were able to get together for visits to pass along milk, but after a few weeks, things started to slow down. Peterson started feeling better emotionally after a few days and says it was nice to be able to rest when she needed and spend time with her own kids.

Leaving the hospital empty-handed after delivering a baby is definitely surreal.

For Hoffenkamp, seeing the baby's mother's face when her twins were born was incredible. Her voice becomes emotional when she talks about it. “This woman was unable to get pregnant after five miscarriages in three years. You could just see how happy she was.”

Like Peterson, Hoffenkamp spent a month pumping milk for the twins so she was able to stay in physical contact with them for a bit longer. “Postpartum, I was just so excited I didn’t have to take care of newborns,” she laughs, “Newborn twins!” She was able to spend time recovering on her own terms, but admits she missed the excitement that comes bringing home a baby.

While it’s true that breastfeeding helps with postpartum bleeding, as it makes the uterus contract down, pumping has the same effect. And while keeping baby close by in the postpartum period seems to be ideal for recovery, there are many circumstances where this isn’t possible, such as when the baby is in the NICU and in cases of surrogacy and adoption. Rest, healthy eating, and having a good support system in place are key components of a good postpartum recovery, and with the baby going home with their family, it means the surrogate can get these things much easier than if she’s also caring for a newborn.

Everything was all about these babies — both times — and giving life to another couple, and then the attention just isn’t focused on me anymore.

Hoffenkamp — who now helps with recruiting for the agency she was a surrogate with, A Perfect Match — ended up doing the surrogacy journey a second time, delivering another set of twins on Christmas Day in 2017 for another couple, FaceTiming with her own family as they opened presents at home.

In January, when she returned to work, she was nostalgic for the excitement again. “Everything was all about these babies — both times — and giving life to another couple, and then the attention just isn’t focused on me anymore. I’m not jealous or anything,” she laughs, but then her voice becomes serious again, “But it’s just different. I’ve had really great experiences, but you just have to make it your own and embrace it for what it is.”

It’s true that, as with having their own babies, surrogates have to make each experience their own. “I remember going to Target two days after delivering my surrogate [baby] and someone asking me when I was due,” Stephanie Fieldseth tells Romper via email. “I didn’t have the emotional well-being to tell her the truth.”

She remembers feelings of loneliness, because no one she knew had gone through surrogacy. “I felt like I had to basically jump back into my pre-surrogate life like nothing happened.”

Rachel Fricke experienced a lot of emotions leaving the hospital and kissing her surrogate baby goodbye. “Because the parents, baby, and I spent the last three days in each other’s rooms, we got very close. We all cried,” she tells Romper via email, “I think with the hormones you’re just a mess that first week.”

“Leaving the hospital empty-handed after delivering a baby is definitely surreal,” Amy Popelka agrees. She tells Romper via email that she had been preparing for that day since deciding to become a surrogate. Her couple needed to stay close by for several weeks until their return home and she says their leaving was the most emotional part. “Not because I wouldn’t get to see the baby, but because we had become like family and I knew I’d miss them like crazy.”

The postpartum recovery was easier for Jolene Shasky when she carried as a surrogate than when she carried her own kids, but because she dealt with complications from high blood pressure, not having a baby to care for made her focus more on her own health issues. “I wonder if I had a baby at home to be overly worried about, would I have been as concerned with my own health?” she ruminates via email.

Those feelings passed two weeks later and she knew she was on the upswing, emotionally and physically. “This was hands-down the best experience ever and I’m still grieving the fact that I can’t do it again.”