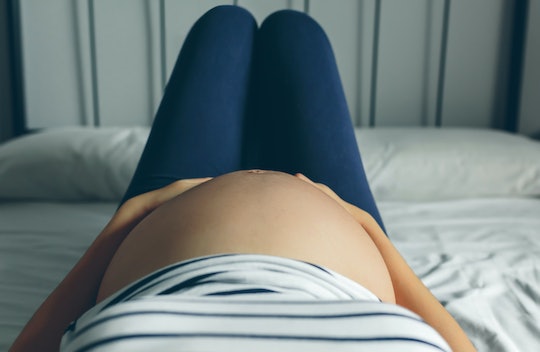 Here's When You Can Feel Your Baby Move The Most, According To Science

Feeling your baby move for the first time is one of the most exciting parts of pregnancy. From the first flutters, to later in pregnancy when it looks like a scene from alien, it's just so cool. You've probably heard that chugging orange juice and maybe even an ice cold soda can make your little one jump around, but when's the best time of day to feel your baby move? Is your babe more active at night, or should you be timing those kick counts over breakfast?

When I had my oldest, I remember feeling very out of body when it came to feeling him move within my womb. It was such a foreign sensation, that tickle that turns into a tumble, that it was almost startling to behold. The bigger he became, and the more real estate he took up in my uterus, the more profound the effect. It was one of the most surreal experiences of my life, watching the twists and turns of an entirely new human move about in my body.

I remember my OB-GYN affirming to me over and over just how important those movements were. Each little tick and jab kept a running receipt in my mind of his health and well-being. One night, about seven months into my pregnancy with him, after a particularly exhausting day of treatment for my severe hyperemesis gravidarum, I realized I hadn't felt him move in several hours. Understandably, I freaked out. I called my OB-GYN immediately. My OB-GYN then had me drink a glass of juice, and get up and move about a bit. After sitting back down, she told me to wait and see. If I didn't feel him move in 15 minutes, I was to call an ambulance, because it was likely he was in distress.

Thankfully, almost as soon as I guzzled the nasty juice and started to heave again, my son perked right up — ostensibly annoyed for having bothered him. He's now 9 years old, and I get the same treatment.

If it's so important, when's the best time of day to feel your baby move? According to BMC Pregnancy and Childbirth, it's not just the best time of day for your baby, it's also the best time of day for you. Sometimes, your baby is moving and you simply don't perceive it. You could be running errands or at Crossfit, or otherwise occupied, decreasing your cognitive capacity to notice the smaller fetal movements your child is producing. However, if you're alert and aware, perhaps sitting and concentrating on your baby's movements, you're much more likely to be in tune with him or her. Basically — sit down and relax. That's a good time to feel them kicking away.

Are you hungry? If the answer is yes (I was always throwing up, so I was always hungry with no real appetite — so annoying), then you're less likely to feel your baby move. There is some evidence to suggest that the longer it's been since you've eaten, the fewer movements you'll perceive, according to The Journal of Perinatology.

If you haven't been active in a while, you might notice your baby gets lazy right there with you. According to ACTA Obstetricia et Gynecologica Scandinavica, walking, and shifting positions from lying down to sitting up can make your baby more active and alert, thereby moving more and making them easier to perceive in-utero. While it's not always instant, their research did show that it happens with enough regularity that they'll use it in a clinical setting to detect increases in fetal heart rate.

For me, I noticed that my babies moved much more after my workouts and after lunch. This may also be that I never let a lunch go by (if I could eat) wherein I didn't have a little sweet something (or an entire Shake Shack concrete, whatever) and they benefited from the sugar rush as much as I did. Also, as any mom will tell you, as soon as your baby gets big enough that their movements are uncomfortable, they can and will dance on your bladder all night long like it's a frat party at Halloween. Trust me.