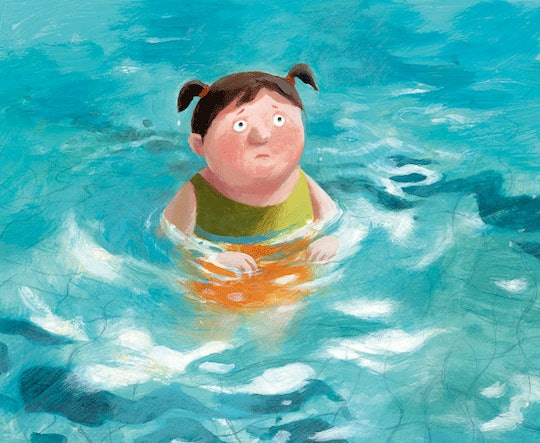 Where Are All The Plus-Size Characters In Children's Books?

When a friend first introduced me to Julia Donaldson's book Cave Baby, I let out on audile gasp on the very first page. The protagonist's mother, a Paleolithic woman seen painting elaborate images on cave walls and otherwise caring for her child and home, actually looked kind of like me. And since having my eldest daughter two and a half years ago, I've realized just how rare it is to see plus-size characters in children's books.

That moment opening up Cave Baby was the first in my adult life in which I found a redeemable human with a double chin, meaty arms, thick legs, and a round body all resembling my own; a body resembling so many bodies in the actual world.

The lack of visibly fat characters in kids' books was something I remembered from my own childhood, but hadn't necessarily dissected until becoming a mother. My partner and I desperately want to ensure our daughters are presented with positive representations of all types of people, in all types of bodies, with all types of abilities, and all types of skin colors. We never want them to believe that "fat" is a synonym for "ugly," "unworthy," "unhealthy," or "uninteresting," regardless of what their own figures look like as they grow older. We never want the cultural fear of fatness to ruin their relationships to food, or to their own bodies, or to the people around them.

One of my favorite ways to present my girls with messages I believe will benefit them throughout their lives is via the books we read them. Unfortunately, finding plus-size characters who are kind, genuine, adventurous, brave, clever, or all of the above in the pages of children's literature is really damn hard.

This isn't to say there aren't any at all. In Abigail the Whale by Davide Cali and Sonja Bougaeva, we meet a chubby young girl who is afraid of jumping off the diving board in swim class. Every time she makes a big splash, her peers laugh cruelly and call her a "whale." In time, she learns to accept that there is nothing wrong with those big splashes, though, or simply with being big.

There is also Brontorina by James Howe. Brontorina is a large, heavy dinosaur who wishes to become a ballerina alongside human children. At first, the teacher and many of the kids are skeptical. Brontorina takes up a lot of space, after all, and frequently bumps into some of the other students. Thankfully, everyone ultimately figures out that Brontorina isn't "too big" to be a dancer. Instead, they realize the room they are in is just too small. On the last page of the story, the instructor creates an outdoor dance academy "for girls and boys and dinosaurs and cows" and makes sure to keep "shoes [in] all sizes" on the premises.

Finding plus-size characters who are kind, genuine, adventurous, brave, clever, or all of the above in the pages of children's literature is really damn hard.

There are plenty of kids' books with broad messages of self-love in them as well, even if they don't specifically center plus-size individuals. I Like Myself by Karen Beaumont teaches readers to appreciate their bodies and personalities alike, including everything that may set them apart from the crowd. Rot: The Cutest in the World by Ben Clanton presents us with a mutant potato who is, by all mainstream definitions, not especially attractive; and yet, it is his individuality, and particularly the characteristics that others might perceive as "flaws," that help him take home first prize in the Cutest in the World Contest.

The trouble is, these stories are exceptions. Outside of the rare dinosaur or specific weight-related narrative following a chubby protagonist, finding plus-size characters in children's fiction who are just as diverse, nuanced, and intriguing as plus-size people in real life life remains a daunting challenge.

It impacts everyone: thin or otherwise not-fat kids, who continue to digest anti-fat biases in the world around them until they eventually assume that fat people are less worthy of celebration or respect than thin ones.

As a now-adult fat woman, and a formerly fat kid, I understand what the lack of seeing yourself represented positively can do to a person, and especially what it can do to a developing child. There were no chubby role models in my children's books. There were no fat heroines, explorers, or love interests. There weren't even fat kids in the background. There certainly weren't any fat Latin-American girls navigating weight discrimination across two cultures who I might turn to when navigating the same; no fat cuties living at peace within their bodies, in stories totally unrelated to their appearances. Twenty-eight years later, there still aren't very many — at least not aimed at younger kids.

The young-adult sector is slowly making room for more of these stories through works like Bethany Rutter's No Big Deal or Julie Murphy's Dumplin', which is now a Netflix movie. But for young kids trying to feel seen, understood, or a little less lonely in elementary school? Not so much.

This lack of visibility arguably doesn't just impact the fat kids who don't learn that their lives can be as full, complex, and exciting as anyone else's. It impacts everyone: thin or otherwise not-fat kids, who continue to digest anti-fat biases in the world around them until they eventually assume that fat people are less worthy of celebration or respect than thin ones; parents and carers who treat fatness, and subsequently fat kids, as inherent problems to be solved; and just about everyone else. Everyone who continues to believe that thinness is key to a life well lived.

If, however, we present our children with alternative messages from the get-go, things may not have to go this way. If we teach them that beauty is undefinable, that fulfillment is not a one-size-fits-all endeavor, that our bodies are worthy of our compassion, and that being big does not negate being great, then we may stand a chance at making things easier than they were for some of us.

Along the way, it helps to have tools that reinforce these ideals. Focusing only on the narratives and images of thin characters in our literature is a formula that does a lot of damage to a lot of people, if not to all people over time. When it comes to children's fiction, in particular, the value of having more fat protagonists, extras, teachers, nurses, doctors, bus drivers, heroes, villains, leaders, friends, partners, cashiers, nature-lovers, fashionistas, or athletes will be indescribable. It will combat toxic messages that claim that fat people cannot, or should not, be any of these things, because it will mirror reality. In reality, we already are all of these things and more — and our kids can be, too.