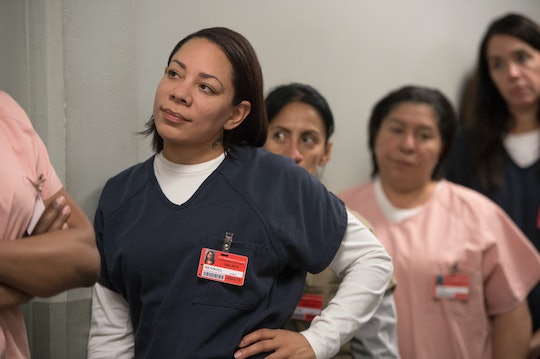 Gloria has been one of the den mothers on Orange Is the New Black since Season 1 and finally, in Season 7, viewers saw more of her life before Litchfield and what led to her moving to New York City. Until now, she seemed to live for her son, Benny, on the outside and the hope that she could do right by him and leave prison to take care of him again. But when she originally came to the US, she had two daughters that she had to leave behind, so where are Gloria’s daughters now?

Orange Is the New Black introduced more of her family this season and although her daughters didn't move with her, they were the reason Gloria went to NYC in the first place — to make a better life. In the Episode 4 flashback, she was shown in Puerto Rico with her mom two young daughters. It was another side to Gloria, one where she seemed hopeful for a better future.

Gloria is a de facto mother to a lot of the younger women she's imprisoned with, particularly the Latina contingent. So it kind of makes sense that she has daughters of her own — even if they're far away. Sadly, after she made a life for herself in New York, and even had another child, the date when she would bring her girls got further and further away.

Gloria told her daughters she was leaving to find a better job and a new home for them all. She got a steady job and was even brought on as a part owner of the corner store where she worked. Gloria saw it as all of the pieces falling into place, but that didn't change the fact that she basically abandoned her daughters.

By the time she finally did send for them, they were old enough to know they didn't want to move to be near her. It’s unclear how long she was gone before she was ready to have her daughters make the move to be with her, but judging by her daughter’s age, it was at least five years. Her daughters came to resent her for taking so long to move them with her and they decided to stay with their grandmother instead.

Gloria ended up building a new family and accepted that her daughters grew up before she was able to bring them to her new home. And when she was forced to leave her son, Benny, she built a new family in prison, which consisted of “her girls:” Maritza, Flaca, Blanca, Daya, and the other young Latina inmates at Litchfield. Maybe she was trying to do right by her daughters by being a prison mom to other inmates as best as she could.

At the end of Episode 4, Gloria found one of her daughters on Facebook, who is now an adult with a daughter of her own. It might be the beginning of Gloria reconnecting with her daughters from her previous life, before prison and New York. She has been a devoted mom to Benny and clearly Gloria feels regretful over her decisions which led to being estranged from her daughters.

There’s still time left in the season for Gloria to do right by the rest of her family and to build a new relationship with her daughters. If the series finale features a flash forward to show fans where all of the inmates end up, it would be fitting for Gloria’s story to end with her reuniting with her family outside of prison after mothering so many when she was inside.