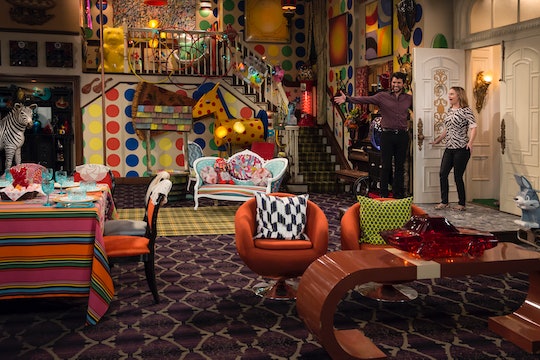 One of the great things about Fuller House is that it fills in so many blanks from the original series. Like Kimmy Gibbler's mysterious family. Back in the day, part of the joke about Kimmy was that she was sort of like an orphan in the Tanner house. She had a family, of course, but viewers never actually saw any of them ever. But now that she's a mom of her own, where are Kimmy Gibbler's parents on Fuller House? Do they even know they have a grandkid or that their son Jimmy has been living in an RV in the Costco parking lot before moving back into his childhood home? Season 3 sheds some light on all of these questions by giving fans a look inside the famous Gibbler house.

In Episode 5 of Season 3, Fernando tries to surprise Kimmy by buying her family home next door. But while D.J. is happy that Fernando is moving out of her house, Kimmy's not totally ready to join her husband and pledges to stay with the She-Wolf Pack. Which makes everyone remember — no one ever saw the inside of Casa Gibbler (except D.J. and Kimmy). Stephanie was even told it was haunted when she little so she never went over to bother her big sister while she played with her bestie.

Which, to be fair, is a totally valid assumption to make once you get a glimpse of what's inside. But where are Kimmy's parents anyway and why did they move out?

When the whole crew ventures across the lawn to go check out of the Gibbler house, viewers are told that Mr. and Mrs. Gibbler left for a bunker in Florida right before Y2K, expecting the entire world to end. Obviously, it didn't, but it appears that no one has gone down to the Sunshine State to tell them that the world didn't actually end.

Kimmy tells Matt, "They'd be disappointed to learn that the world never ended." To which Jimmy adds, "That's why we didn't tell them." Obviously, the Gibblers are sort of out there. Not only are the Gibblers hiding out in some bunker in Florida (can we please get a family reunion episode?), but their home furnishings are, uh, interesting.

Fans learn that Fernando and Jimmy have "fully restored" the house to its former Gibbler glory, with all the "strange artifacts" that the house used to hold. And the house is definitely strange. As Stephanie says when she enters, "I feel like I should call and let someone know where I am." Uh, same, Steph, SAME.

The first thing we see is the scariest looking clown doorbell ever, but the inside has a unique personality all on its own as well. Kimmy is thrilled to see that her parents kept the refurbished "farting chairs," which make fart noises when you sit down on them.

They also enforced "time outs" for Kimmy and Jimmy. But instead of banishing them to a corner or to their room, as Kimmy demonstrates, they had to put on special suits and fling themselves onto a Velcro wall. "Remember when they left us here and went to Napa," Kimmy reminisces with her brother.

Seriously, if you ever wondered why Kimmy is so eccentric, now we know why. Back in the day, in the original series, the Gibblers paid Danny to take Kimmy on vacation with his family to Disney World, and there were always weird, random mentions of what they were up to in Full House, though they remained unseen characters.

So farting chairs, Velcro walls, and creepy clown doorbells make total sense. Full House and Fuller House creator Jeff Franklin told TVLine that they never planned the Gibblers out fully. “I don’t think we ever gave [Kimmy’s parents] actual professions, though we alluded to all sorts of crazy careers and hobbies," he said. He also added that creating the house for Season 3 was a lot of fun:

All of the Gibblers turned out pretty strange, so we started with the idea that it would be a funhouse. We actually ran out of room on set with all of the things we wanted to do.

They definitely did a great job. Now if only we could meet the Gibblers and find out where they got the whoopie cushion chairs, because they are sort of hilarious.