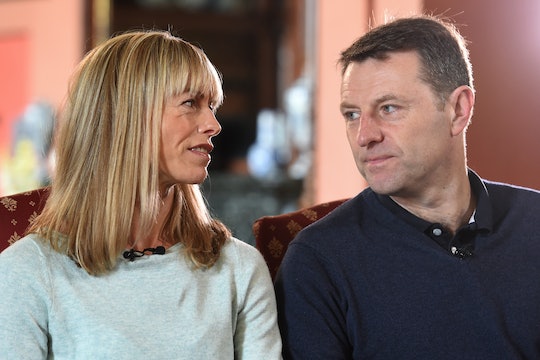 Madeleine McCann's Parents Are Still Dedicated To Finding Their Daughter

On Mar. 15, Netflix released The Disappearance of Madeleine McCann, a true crime documentary series detailing the 2007 case of 3-year-old Madeleine McCann, who vanished while she was on holiday in Praia da Luz, Portugal with her parents, Kate and Gerry McCann, who were not involved in the making of the Netflix docuseries. Naturally, since Netflix is home to hit true crime series such as Making a Murderer and Abducted in Plain Sight, fans of the genre have been digging into everything they can about the McCann family, including where Madeleine McCann's parents are today.

Since her disappearance nearly 12 years ago, Madeleine's parents, Kate and Gerry, who were both physicians, never gave up on their search for their daughter. In 2011, Kate wrote a book about their firsthand experience, titled Madeleine: Our Daughter's Disappearance and the Continuing Search for Her. According to Newsweek, the profits of the book are donated to finding Madeleine, and as reported by Metro in Sept. 2018, the search has already spent about $15.2 million.

As for their day-to-day lives, MSN reported that Kate is now a medical worker who lives in Rothley, along with her husband and twins Sean and Amelie, who are now 14 years old and aspiring athletes. Kate and Gerry, who were in their late 30s at the time of Madeleine's disappearance, are now both 51. And while they are still holding out hope that they will one day find their daughter, they have denounced Netflix's The Disappearance of Madeleine McCann.

In a statement on their website, FindMadeleine.com, Kate and Gerry revealed why they were not in the documentary. While Netflix reached out, the couple did not wish to participate in The Disappearance of Madeleine McCann, nor did they see the series helping in the investigation. The statement read:

We are aware that Netflix are planning to screen a documentary in March 2019 about Madeleine’s disappearance. The production company told us that they were making the documentary and asked us to participate. We did not see and still do not see how this programme will help the search for Madeleine and, particularly given there is an active police investigation, could potentially hinder it. Consequently, our views and preferences are not reflected in the programme.

When the eight-part documentary was released on Netflix on Mar. 15, Kate and Gerry's spokesperson fired back at the series on ITV's This Morning.

"This fuels those conspiracy theorists, there's whole websites and forums dedicated to vilifying them and others around them, myself included," Mitchell said. "It's nonsense. If the allegations that have been disproven and discounted are aired again, I'm afraid it will fuel that. Kate and Gerry ignore all of that."

The Disappearance of Madeleine McCann Executive Producer, Emma Cooper, responded to the McCann's statement and explained that the documentary attempts to make it "as comprehensive an exploration as possible." In the interview with Newsweek, Cooper stated:

We have informed the McCanns of our intention with this series from the outset and asked them to contribute. We have also offered to show them the entire series prior to transmission and kept them informed throughout. While they chose not to participate, we believe that the series, two years in the making, is a comprehensive and thorough examination of the case over the past twelve years. We have interviewed more than 40 contributors including friends of the McCann family, eyewitness, private investigators, former suspects to make this as comprehensive an exploration as possible.

It has been 12 years since the disappearance of Madeleine McCann. While there are thousands of theories surrounding the case, there is no evidence that explains exactly what happened to Madeleine and whether or not she is dead or alive. However, Kate and Gerry continue to stay dedicated in the search for their daughter — no matter what they might find.

The Disappearance of Madeleine McCann is now streaming on Netflix.