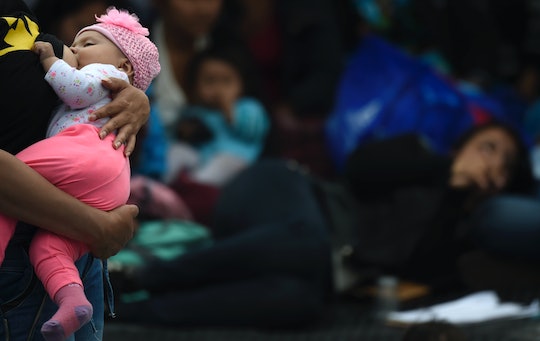 Where Are People Actually Welcome To Breastfeed In 2019?

Hannah, a mom of three, was at a restaurant with her kids and nursing her three-month-old when she was confronted by an older woman. “She came over and started wagging her finger at me, like in a movie from the '50s,” Hannah tells Romper, “loudly lecturing me how lewd it was and how inappropriate I was being.”

In shock, Hannah, who asked that her last name be withheld, didn’t say a word, but the confrontation attracted the attention of another guest, a grandfather at a nearby table, who told the woman to leave her alone. “It was demoralizing to have it happen in our favorite local eating spot,” Hannah says.

"You have the right to breastfeed your baby wherever and whenever your baby is hungry," states the U.S. Department of Health & Human Services on its website, but Hannah's story is common. Over 80 percent of moms start out breastfeeding their babies, according to 2015 data from the Centers for Disease Control, but only 24 percent are still doing it exclusively (meaning no solids, water, or other liquids) after six months. The American Academy of Family Physicians admits that while the World Health Organization recommends breastfeeding until two years old and beyond, it isn’t the norm in the United States. This is for a variety of reasons, part of it is a function of social pressure and accessibility for breastfeeding parents.

Some of the most under-served locations for lactation accommodations are retailers, healthcare facilities, and schools.

While federal law requires employers to provide a space for lactating parents to pump or breastfeed, public spaces can be hit or miss. The Friendly Airports of Mothers (FAM) Act, pegged to the Federal Aviation Act reauthorization and passed in 2017, requires major airports to provide lactation rooms (access for employees of airlines is a separate issue). Since 2017, you have probably seen a Mamava pod, the freestanding lactation stations you’re seeing popping up in airport terminals and stadiums (Mamava says the 900+ pods in North America have seen upwards of 1.7 million users), though smaller airports are not covered by the federal regulation.

"Many women have used the 'take action' forms on our website to make requests for lactation accommodations in airports, but with the passage of the FAM Act, now most major airports are working to provide Mamava suites or built-in lactation rooms," explains Sascha Mayer, Mamava CEO and co-founder, to Romper over email. "We do know that some of the most under-served locations for lactation accommodations are retailers, healthcare facilities, and schools. The majority of employees in these workplaces are women, and the workplaces tend to have limited space."

Meanwhile, Gametime has found that 42% of the big four professional sports venues do not offer a quiet and sanitary environment for mothers to lactate, and CDC data found that just 68% of 4,000 people surveyed agreed (with the law) that mothers have the right to breastfeed in public spaces.

Even with access, there are challenges. Caolan Madden told me she tried to use a pod at Newark Liberty Airport but couldn’t figure out how to work it. She later learned you needed to have an app to unlock the pod, but there were no instructions there at the time. “I ended up nursing the baby at the gate, packed in tightly with lots of other passengers,” she says, “I should add that I’m pretty comfortable nursing in public and know that those pods are probably most useful for pumping, but I did like the idea of having a private, distraction-free place to nurse.”

My editor at Romper pumped successfully using a hand pump at a small regional airport without any power outlets, and was able to freeze and store breast milk while interstate, but found that her breast milk had melted by the time she had flown home. Startups like Ceres Chill hope to solve the issue of transportation, with a thermos that claims to keep milk cold for 16 hours.

Spaces like churches have been criticized in the past for a lack of facilities; Anna Peguero was asked to leave a Virginia church in 2017 for breastfeeding, as reported by People, in violation of state law. The same year, Pope Francis stated his support for parents feeding their children wherever they need to.

Even where employers are in compliance, company culture can be a barrier to breastfeeding behaviors. Misty Lindstrom, a mom from Ottawa, Illinois, had a coworker who wasn’t thrilled that she wanted to store her milk in the community fridge and pump in the break room. “She wanted me to sit in my hot car and do it,” Lindstrom tells Romper, “Which I would have but there was no space and a couple of times I spilled the milk and cried over it.”

Brittany Williamson, a mom from St. Paul, Minnesota, who works as a teacher says she had no problem nursing in public, but being on the go for work was challenging. While chaperoning a field trip, she found the site’s nursing pod was out of order. “I had to pump uncovered on the public bathroom floor under the sinks because that’s where the outlet was, while my fifth grade students trickled in and out.”

There were the glowing stories about the places that seem delighted to have lactating parents on site: Disney, Target, you know the spots.

Some parents have filed lawsuits regarding the lack of accommodations or the discrimination they've experienced. Katherine Frederick, who previously lived in Tamworth, New Hampshire and was a former employee of the Department of Health and Human Services is set to appear in court in September 2019 after a seven year legal battle. Frederick says she had requested to breastfeed her son at the nearby daycare or on site at work and was told she could pump milk into a bottle and bring it to him instead. When her leave was up, she didn't return to work and was ultimately fired. Rachel Pierce, from Minnetonka, Minnesota sued her employer, Shane Co., after she said they failed to provide an adequate amount of time to pump during the day as well as for failing to provide an acceptable, private place to pump. The allegations go beyond the workplace. In March 2019, Myranda Juarez was volunteering at Jeffersontown Elementary School in Kentucky when she took a break to nurse her baby and was approached by the school counselor. Juarez was told her "actions were inappropriate" and she could use the counselor's office, or leave. She's suing both the counselor and the school's principal.

Megan Paonessa, a mom from Chicago reported that her city has an app that will show places to go for breastfeeding privacy. She also described the breastfeeding tents at street festivals being surprisingly accommodating. “Once there was an air conditioned trailer just for breastfeeding at a local pumpkin patch,” she said. There were the glowing stories about the places that seem delighted to have lactating parents on site: Disney, Target, you know the spots.

On the whole, progress has been made at both a public opinion and regulatory level. And you can expect to see more lactation pods in the future: Andrea Casals has tried them all over the country. “It was great,” she explains of the service, “The only con is that it doesn’t have a changing table and breastfed babies tend to evacuate right after!”

More Like This
Celebrating Your First Mother's Day? These Quotes Say It All
Ashley Graham On The “Fun, Organized Chaos” Of Raising Twins
These Tweets Chiming In About The Baby Formula Shortage Have It Oh So Wrong
40 New-Mom Quotes For Inspiration & Commiseration