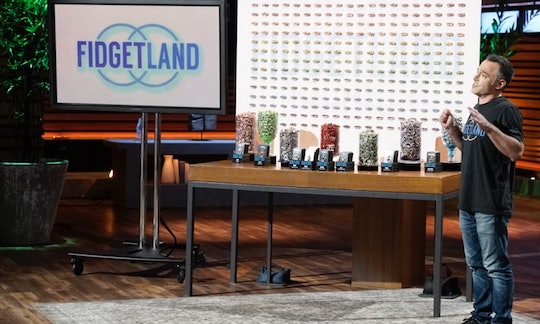 Whether you’ve used them yourself or have seen literally every kid in your life play with fidget spinners, you know how fun they can be. Since they rose to popularity earlier this year, there have been plenty of takes on the original, but on Shark Tank this season, Fidgetland founder Jason Burns presented a new kind of fidget product that's already had some success on its own. So, where can you buy the Fidgetland products from Shark Tank? These toys aren't your typical fidget spinners (in fact, Burns' company doesn't even sell regular fidget spinners), but these much smaller (and less flashy) items can serve a very important purpose.

Burns’ Fidgetland products are made with two interlocking rings as well as two silicone bands, meant to roll back and forth to create a sort of treadmill effect on the rings. You can find the Fidgetland products on the official website with plenty of options to fit your personal preferences. You can also buy them on Fidgetland’s Amazon account. But while Fidgetland products might seem like just another version of the original fidget spinner, these fidget products are actually supposed to be very helpful for people diagnosed with attention disorders. In fact, as the website's "Fidget For School" section explains, the devices are quiet enough so kids can use them throughout the school day without disrupting anyone else in class or drawing attention to themselves.

The website goes on to say that: "Children have had tremendous success using our fidgets to overcome or cope with symptoms associated with: ADD, ADHD, ASD, Autism, Asperger Syndrome, Sensory Integration, Trichotillomania, SPD, Nail Biting, Thumb Sucking, Anxiety, Stress, Hair Twirling and many others."

So this is clearly something that Burns is passionate about.

"When I was in 11th grade I was diagnosed with ADD," Burns said on Shark Tank. "The woman who diagnosed me said that my ADD was so severe that I would never be able to survive at a four-year university, and I shouldn't try to pursue a job that required any type of education."

Regardless, he still managed to graduate from the University of Arizona, but as he still struggled with the everyday habits of bouncing his knees or otherwise moving around to burn off energy, Burns created his first fidget in his garage. "I went and looked in the garage to see what we had," Burns said. "I took some bike chain, I took some key rings and put it together and that is how I made my first one." And from there, it’s history — mostly.

Burns’ Fidgetland products are designed to be small enough to fit in anyone’s hand and be used discreetly while in class, meetings, or basically anywhere. According to Burns’ website, soon after he started selling his products himself, he began receiving emails from parents who’d had real success with his Fidgetland products.

I started selling my fidgets via my own website fidgetman.com and quickly began getting emails from parents whose children had ADHD, Autism, ASD, or suffered from learning disabilities, anxiety, nail biting, hair twirling and other disorders. The emails were so moving and unexpected, to think that my fidgets were actually helping to change and improve lives, it was amazing!

On Shark Tank, Burns revealed that so far on his own, he’s managed to sell more than 50,000 units and with investor Barbara Corcoran’s $50,000 investment in Fidgetland, those numbers are sure to rise. The "shark" herself said that supporting a company whose main focus is helping those with learning disabilities is something that’s important to her, so investing in Fidgetland was likely an easy choice.

Right now on the Fidgetland website, you can purchase Burns’ products for $8-$15 and each one is discreet enough for anyone in need to use them without drawing attention to themselves. The second fidget device Burns created, which he named Ellie after his daughter, is just $8 and designed with smaller hands in mind. There’s also the Little Fella, which is $12 and designed to be a silent fidget for classrooms and meetings.

But if you want to buy some of these handy gadgets, you’re going to need to act pretty fast, as the earliest ship date for some of them is Dec. 1. Thanks to their discreet design, Fidgetland products are sure to be utilized for concentration more than just play and judging by the feedback Burns has already gotten, the fidgets are doing their job.