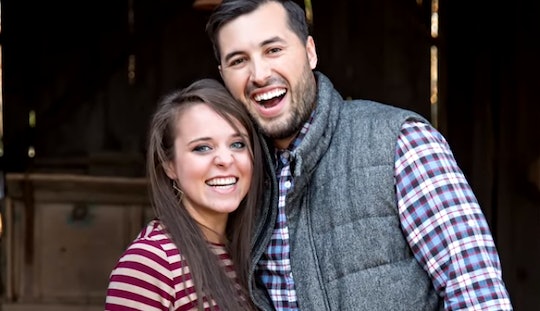 Jinger Duggar Gave Birth, & Everyone Wants To Know Where It Happened

It's now 12 grandkids and counting for the Duggar family. Jinger Vuolo, the sixth child of Jim Bob and Michelle Duggar, welcomed her first child, a girl, on Thursday, according to Us Weekly. But the question on everyone's mind is, where did Jinger give birth? Much ado has been made about the Duggar and Duggar-adjacent women preferring home births over hospitals, but Jinger's not sharing that detail with her fans just yet.

"God is so kind," the Vuolos posted on their website. "Jinger gave birth to Felicity Nicole Vuolo this morning at 4:37 a.m.. Felicity weighs 8 lbs and 3 oz, and is 19.5 inches long. Both mom and baby are healthy, doing great, and resting well. We are very thankful for her safe arrival and look forward to life as parents!" Many fans speculated during Jinger's pregnancy that she'd attempt a home birth like her older sisters and sisters-in-law have, which would normally be a safe bet when it comes to the Duggars, but Jinger's a bit of a wild card; unlike the other women in her family, she participated in "full frontal hugs" before marriage, according to OK magazine, and since Jim Bob turned her over to Jeremy's control, she's been wearing makeup, shorts, pants, and sleeveless shirts. That's what you get when you let your daughter marry a man with a tattoo, I guess.

Jinger also took a lot longer to procreate, compared to her older siblings. She and Jeremy were married in November 2016, and they didn't announce her pregnancy until January of this years, which stirred up rumors that she might have been using birth control. The family is against that, as you might expect, but not just because of their "have all the babies" mentality; they labor under the delusion that it causes miscarriages. According to In Touch, Michelle used to be on birth control. It failed and she got pregnant, but later miscarried, and I guess the doctors didn't tell her that it was completely unrelated: "As conservative Christians, we believe every life is sacred, even the life of the unborn," she posted on the family's website. "Due to our lack of knowledge, we destroyed the precious life of our unborn child."

Jim Bob went even farther with the scientifically unsound reasoning: "Something we didn't know is that the pill can actually allow women to get pregnant, but then it can be aborted. That's what happened with Michelle," he claimed at the 2014 Values Voter Summit, according to Hollywood Life. He also claimed that a doctor had confirmed this, but if that's true, that doctor should have his or her (oh, who am I kidding) licensed revoked. Per the U.S. National Institutes of Health, there is "no evidence that oral contraceptive use before or during pregnancy is associated with an increased risk of fetal death," and according to the Mayo Clinic, taking birth control pills during early pregnancy doesn't even increase the risk of birth defects. They prevent pregnancies from occurring, when taken correctly, but they do not and cannot end one that already exists.

Whether Jinger took birth control or not — and to be clear, that's nobody's business but hers — she did eventually start making babies like everyone else; we're just not sure where, exactly. No matter the setting, though, that's one choice we can't blame on her "rebel" ways, since plenty of Duggar kids have actually been born in hospitals. Jinger's older sister, Jill Dillard, an unlicensed midwife herself, attempted home births with both of her sons, but ended up having to go to the hospital for emergency C-sections after laboring for days with each of them. And their younger sister, Joy-Anna Forsyth, followed in Jill's footsteps earlier this year.

Even Michelle, the template for the Duggar women, had most of her kids in the hospital. In fact, Jinger herself was the first Duggar baby to be born at home. From her 2009 memoir, The Duggars: 20 and Counting! Raising One of America's Largest Families — How They Do It:

After five children, we felt confident we knew how my body handle the birthing experience, and we had heard many positive stories about families whose babies are born at home. The more we heard, the more appealing it sounded.

However, in addition to a midwife, Michelle also had an actual doctor present as well (hope it wasn't the same one Jim Bob gets his medical advice from). She did the same for her seventh birth, but the rest were born in hospitals, which she concluded she preferred "for safety." No word yet on whether or not her daughter Jinger followed suit!