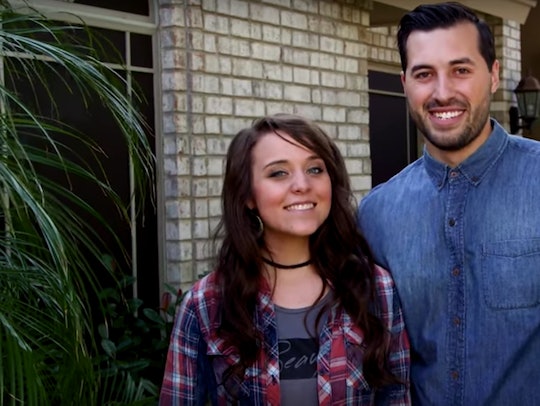 Jinger Duggar Is Halfway Through Her First Pregnancy, But Where Will She Give Birth?

Even though it feels like it was just yesterday that Jinger Duggar announced that she's expecting her first child with her husband, Jeremy Vuolo, the reality star has actually shared a decent amount of information regarding her pregnancy. Along with posting somewhat regular pregnancy updates on Instagram, the 24-year-old has also revealed that she's not going to find out the sex of her baby. With her due date approaching, likely sometime this summer, there's still the question of where Jinger Duggar will give birth to her first child and if she'll follow in her sisters' footsteps when it comes to her birth plan.

Although she has not spoken about her birth plan, it might be safe to assume that since Duggar and Vuolo reside in Laredo, Texas, that's where she'll decide to deliver the couple's baby-to-be. Whether she'll head to a hospital or opt for a home birth is a little less clear, but it is possible that she could be considering the latter. Looking back at the Duggars' birth stories, as In Touch Weekly reported, many have chosen to give birth at home, or at least have planned to.

Indeed, many Duggar women have planned on delivering their babies at home, but if any complications arose, they went to the hospital when necessary, according to In Touch Weekly. Again, Duggar has not publicly commented on her birth plan, but if she wants to follow her sisters and mom's plans, then she could very well be considering delivering her first child at her Texas home, too.

Most recently, according to People, her sister Joy-Anna Duggar welcomed her first child, a baby boy named Gideon. While she had planned on having a home birth, she was later transported to a hospital when complications arose, the publication reported. Specifically, Joy-Anna "started her delivery at home, and after 20 hours of labor, she was rushed to the hospital for an emergency C-section when her mid-wife determined that the baby was breech."

While her sisters had planned on giving birth at home, their birth stories serve as an important reminder to be flexible with your birth plan. Things happen and you have to roll with the punches. Of course, there's the possibility that Duggar could bypass the home birth option and head straight to the hospital. Whatever she decides to do, whether it's something discussed now or in the moment, will ultimately be the best decision for her and her baby.

Interestingly enough, though, Duggar was actually the first of her siblings to be born at home, according to the Duggar Family Blog, which explained:

Jinger, baby number six, was born at their house, brought into the world by a doctor and a midwife. Michelle loved begin able to walk around during labor, and she recovered in record time.

Duggar is still months away from her due date, but all these questions might be answered in a future episode of Counting On. For example, both Jill and Jessa have shown footage from their births on the family's shows. Jill giving birth was shown on 19 Kids & Counting, while Jessa's birthing journey was shown through home videos on Counting On.

Given how open she's been with fans thus far, it's likely that she'll share a few more details about her pregnancy as time goes on. In the meantime though, it's a pretty safe guess that she could deliver her bundle of joy in Texas and hopefully she'll indulge fans with a few more photos of her bump before her baby arrives.