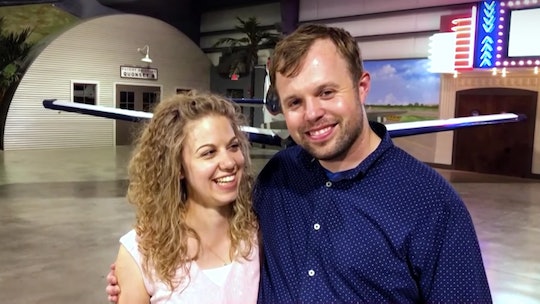 This weekend, the Duggar family gained yet another Duggar — but who's Counting? On Saturday, Nov. 3, John David Duggar, 28, married Abbie Grace Burnett, 26. In true Duggar fashion, their wedding special will air on TLC in just a few weeks. But in the meantime, fans want to know as many details as possible. For example, where did John David and Abbie Burnett get married?

Most Duggars get married in the family's Arkansas church, but John David and Abbie opted to tie the knot in her home state instead: Oklahoma, according to TLC. In a video for TLC, Abbie said that one of her favorite wedding moments was "the opening song, just welcoming in God's presence," so it would seem that they got married in a church, though the network did not specify which one.

As TLC explained in a blog post about the happy day, the couple got hitched in a "beautiful autumn wedding ceremony," followed by a reception in an airplane hangar. That party locale seems a bit random at first, but John David actually proposed to Abbie in an airplane hangar — plus, he is a licensed pilot — so it's actually a pretty meaningful choice for the couple.

Although photos from the hangar have not yet been released, I have no doubt that the couple transformed the space into a beautiful wedding venue for their big day. They even organized a breakfast buffet for their guests, as noted on TLC's blog post. A+ choice, guys!

In the video they filmed for TLC on their wedding day, Abbie and John David are palpably overjoyed to finally be husband and wife. That is heard through their words, and seen through her sitting on John David's lap for the entire clip.

"The moment when we said 'I do,' it was a little surreal because I've dreamed about that ever since I met Abbie," John David said in the video. Abbie added that her other favorite moment, besides the opening song, was "John's tender kiss at the end." All Duggar couples wait until their wedding ceremony to kiss for the first time, and if John David and Abbie followed the custom, it's easy to see why the kiss — and the lap-sitting — was so thrilling for the couple.

The couple echoed those feelings in a joint statement for Us Weekly this weekend. “We are so excited to be married!” the couple told the magazine. “It was a beautiful moment and we so appreciate our friends and family for sharing this day with us. Most of all we are thankful to Christ for bringing us together. This is going to be an amazing journey!”

All fans have gotten to see so far is the couple's wedding outfits (Abbie looked absolutely gorgeous in her gown, which came from Renee's Bridal, according to People), but luckily, more content is on the way. John David and Abbie's wedding special will air on TLC on Tuesday, Nov. 27 at at 10 p.m. ET, and TLC will be dropping surprise early footage on the TLC GO app sometime before then.

Congrats to the newest Mr. and Mrs. Duggar!