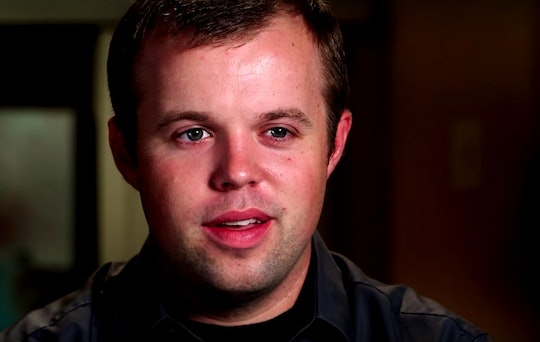 Here's What We Know About John-David Duggar

It sure can be hard to keep track of all 19 Duggar children (not to mention, six children-in-law, nine grandchildren, and three more grandkids on the way). With so many of the older Duggar kids tying the knot and subsequently stealing the spotlight over the past few years, it's worth noting that one of the oldest Duggar siblings has yet to get married (a high priority for the family) and has therefore spent less time in the spotlight. So who is John-David Duggar, and what has he been up to while so many of his younger brothers and sisters have been cranking out babies?

John-David, 28, is the third-oldest Duggar child. He is sister Jana's twin; Jana is another older Duggar kid who is notably still single. Various rumors that John-David was courting — the Duggar family's highly-conservative version of dating — have circulated, but the family never confirmed any of the gossip.

In a video for TLC in April 2016, John-David talked about his future plans in terms of family life and revealed that he would like to get married and have kids someday. "Future plans would be to, I think, one day, you know, the lord will bring the right one along, and I'll start a family and hopefully be able to invest in their lives and raise up a generation that will be great people for this society," he said. He then digressed, saying "I don't know ... I am praying about it ... one day. Just keep watching."

In August, The Hollywood Gossip reported that John-David might have been secretly courting. As per an anonymous insider (so definitely take it with a grain of salt), John-David was in a hush-hush relationship with a woman from Texas. In late 2015, rumors swirled that John-David was romantically involved with Tabitha Paine, the sister-in-law of one of the Bates family's 19 children. (The Bates family has their own show, Bringing Up Bates.) Paine quickly shut down the buzz, explaining that she was a live-in tutor for some of the Duggar kids, and was only spending time with John-David as friends. And according to In Touch, John-David once conveyed annoyance at the pressure to start courting. "I don't know why they're so hung up on me finding a woman," he reportedly complained in an episode of the family's reality show.

But now, nearly two years after he expressed his desire to start a family one day, John-David still seems to be single. Twenty-eight is certainly not an old age to be a bachelor in the real world — but in Duggar world, where it's not abnormal to get married as a teenager, it's understandable that he'd be feeling the pressure.

In terms of a career, the Duggar family blog reveals that John-David keeps himself pretty busy. He has his pilot's license, does construction work, and is a constable in Washington County, Arkansas, where the Duggar family resides. Duggar kids generally live at home with their parents (and therefore under their parents' strict rules) until they get married. John-David has never confirmed whether he lives at home, though it's likely, considering he is a constable in their home county. Additionally, as the insider source allegedly told The Hollywood Gossip, John-David took his pilot training classes in Mississippi, meaning he spent some time there and away from his hometown.

Unfortunately for fans, John-David doesn't have a public Instagram account of his own. For the most part, Duggar children only get their own Instagram accounts once they're courting or married. It's definitely unique that John-David, as well as Jana, are not on Instagram, even though they are adults and several years older than some of their siblings who do have Instagrams.

While most of the public information about John-David Duggar's love life (rather, courting life) seems to be nothing more than rumors, you can bet that when he does find his special someone, the Duggar family will be sharing the news for all to hear.