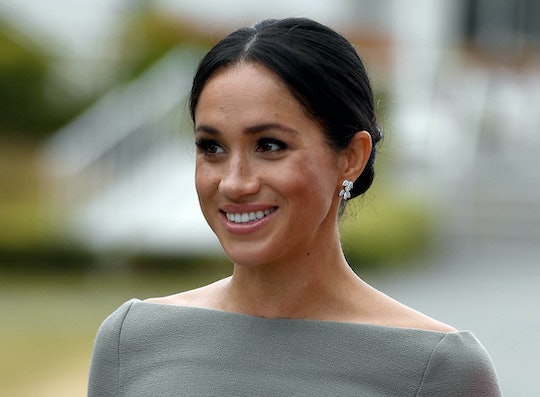 Meghan Markle Is Officially A Mom To A Baby Boy, But Where Did She Give Birth?

Well, the day has finally come. After months and months of waiting on pins and needles for Baby Sussex to arrive, Meghan Markle and Prince Harry have officially welcomed their first child together — a baby boy! Many details surrounding their birth plan have, understandably, been kept under wraps for the past few months, but now that their son has been born, a few have been revealed. For starters, we know, at least geographically, where Meghan Markle gave birth to the newest royal baby, who arrived on Monday, May 6.

Earlier today, as The Guardian reported, Prince Harry addressed reporters to announce that his wife had given birth to their son, saying that he was "over the moon." He said, "As every father and parent will ever say, you know, your baby is absolutely amazing, but this little thing is absolutely to-die-for, so I'm just over the moon... It's been the most amazing experience I could ever have possibly imagined. How any woman does what they do is beyond comprehension."

Now, it's not clear if Markle gave birth at home or in a hospital, but what is more clear is that she gave birth in Windsor, which is outside of London (aka, not the infamous Lindo Wing at St. Mary's Hospital). As you'll see in Prince Harry's sweet video with reporters, he's standing in front of a couple horses outside of their new home in Frogmore Cottage.

As expected, there was a lot of speculation about where Markle would give birth to her first child, mostly because she and Prince Harry moved to the royal family's Frogmore Cottage in Windsor, according to Hello! Magazine, which is about an hour's drive from London. Indeed, being so far from London led many to wonder if she'd veer away from a modern-day royal tradition and give birth in a new location closer to home.

Markle and Prince Harry's sister-in-law, Kate Middleton, gave birth to all three of her children with Prince William in London, specifically the Lindo Wing at St. Mary's Hospital, according to The Sun. The late Princess Diana also gave birth to Prince Harry and Prince William at the Lindo Wing, according to ABC News, posing on the famed steps with her newborns. As such, royal spectators were very curious about where the Duchess of Sussex would choose to deliver.

Leading up to Markle's delivery with Baby Sussex, there wasn't one clear answer about where she'd give birth, which makes complete sense as she and Prince Harry released a statement in April via Buckingham Palace saying they wanted to "keep the plans around the arrival of their baby private."

But that didn't stop speculation of the location and her birth plans, of course. For starters, the Daily Mail previously reported that Markle was "considering a home birth" at her new home in Frogmore Cottage in order to avoid "the goldfish bowl" that may come with giving birth in a hospital. And around that same time, CNN reported that Markle had "hired a doula, or birth companion, to help her through the process" of a home birth.

There was also speculation, of course, that Markle would give birth in a hospital, presumably in or near Windsor — specifically, Frimley Park Hospital in Surrey, as TIME reported, which is just 30 minutes away by car from their new home. It wouldn't have been a completely surprising choice, as at least one royal — Sophie, Countess of Wessex — has given birth there in recent history, according to The Sun.

Now that Markle's pregnancy has come to an end, the world can rest assured that the Duchess of Sussex chose the best location to welcome her family's newest addition.

Welcome to the world, Baby Sussex!