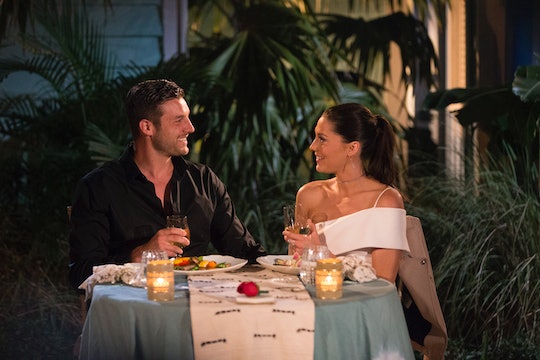 It's time for hometown dates on The Bachelorette, which means Becca will jet off to four different locations to meet her potential future in-laws, including those of clear frontrunner Garrett. So where do Garrett's parents live? The Bachelorette contestant is currently in Reno, Nevada, but he is actually from California.

While there's not a lot of information on his family online, I did find that Garrett is from Manteca, California. "Raised in a small town in Central California, Garrett is a true outdoorsman who loves fly fishing, hiking and snowshoeing," Garrett's ABC biography states. It says he lives in Reno (as did the introduction video during the premiere), but TMZ snooped back in April and spotted Garrett and Becca in Manteca, presumably on the hometown date. This would mean Garrett's parents are probably still there.

In the preview for Bachelorette hometown dates, Garrett's parents expressed doubt about the show and that Becca and Garrett can actually fall in love. Garrett's dad says, "This is all happening fast" and mentions that Garrett's heart has been broken before. Garrett's mom questions Becca by saying, "I don't know where your heart is." These are all genuine concerns any family would have if their child was on The Bachelorette. Finding a partner and getting engaged in a matter of weeks is pretty bizarre (but hey, Pete Davidson and Ariana Grande did it), so it makes sense that they're skeptical.

What's more, they may be questioning this more than other parents seeing as Garrett was married to a woman named Kayla Cunningham before the show. In 2015, Garrett and Kayla tied the knot — but were divorced six months later. On The Bachelorette, Garrett described how he was heartbroken and how she changed as soon as they got married. Life&Style magazine reported, however, that Garrett's ex-wife tells a different story. A "friend" told them that Garrett had a troubling past with his ex, Kayla. Apparently, once the vows were said Garrett started being cold to his newlywed wife. "A week later, he said he wanted half of everything," the friend told Life&Style. "I want Becca to know the truth about Garrett. He's a nice guy at first, but she needs to watch out."

Having never known the couple personally, I can't speak to whether Garrett or his ex-wife's reported "friend" is telling the real story. What I do know is that Becca appears utterly smitten with the California-native on the show.

One issue that I do have with Garrett is his history of "liking" offensive social media posts on his Instagram account. Garrett remade his Instagram and apologized, but the incident has inspired fans of the show to call on ABC and The Bachelorette to overhaul their casting procedures. Garrett is certainly not the only contestant to have a less-than-savory social media past, but fans are additionally disappointed in him because he's such a front-runner.

All this being said, Garrett's hometown date is sure to be an interesting one. I'm sure all of the families of the final four — Garrett, Colton, Blake, and Jason — will have some tough questions for Becca regarding her feelings and indeed the whole process. Ultimately, though, I hope Becca comes out of it feeling that she could be a part of their families and have a lasting relationship with at least one of these men.