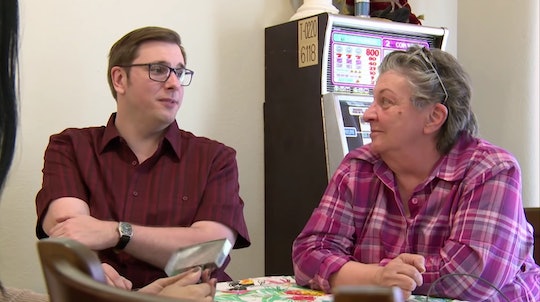 On this season of 90 Day Fiancé, Colt and Larissa have faced plenty of obstacles — the largest of which has been Colt's relationship with his mother, Debbie. Colt has lived with Debbie for almost his entire life, but as soon as Larissa arrived in Las Vegas, Larissa made her desire to move away from Debbie very clear. So where does Colt's mom live now?

If remarks Debbie made on 90 Day Fiancé are true, then she's most likely living in a retirement home or her own apartment somewhere in Las Vegas. In a recent episode of 90 Day Fiancé, Colt and Larissa spent the day looking at new homes for the two of them to move into. When they returned to the house that they share with Debbie, Colt had to break the news. Debbie asked Colt what they were up to, and he told her, "We looked at some houses," with a very nervous look on his face.

Larissa wasted no time in telling Debbie the apartment was a one-bedroom. Luckily for the couple, Debbie gave them an out. "If you guys moved into a loft, I would find a senior place to move," Debbie told the couple. "You don't have to feel like you're tied down to taking care of me or living with me, I'm fine moving on."

Throughout the conversation, both Debbie and Colt appeared to be fighting back tears. Conversely, Larissa looked extremely bored. As the discussion moved forward, however, things weren't quite as black and white. Debbie cried to the cameras about how sad this information was. Colt all but cried to his mom that he didn't want this to be happening. "In an ideal situation, I would be happy for you to live close to us or next door, or maybe ... a bigger house," Colt said. However, Larissa did not seem to be feeling any of that. "I don't want to live with Colt's mother and I don't want to live next door," Larissa told the cameras. "It's time ... he cut the umbilical cord."

Throughout the season, Colt and Larissa argued about the living arrangements — and Colt made it seem like Larissa was messing up he and his mom's flow. "I feel like the largest barrier for us will be just to learn to live with my mother," Colt told the cameras earlier this season. "My mother and I had our thing going for many years, and now Larissa is here, and it's different, but it's good. I think we can have a really good life together." Here's hoping that by the time Colt and Larissa tie the knot (or don't), everything is sorted out between the trio.