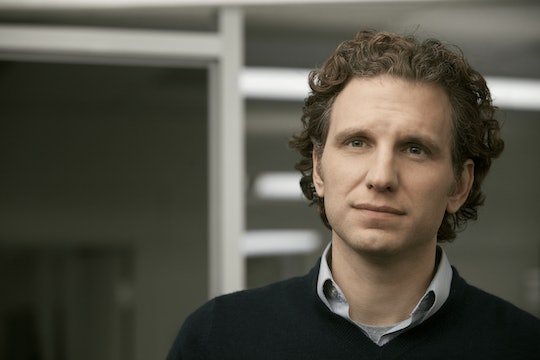 Where Does Lucas Goodwin Live After Prison On 'House Of Cards'? John Carlyle Has A Very Different Life

The President everyone loves to hate is back in the White House: House of Cards season four is finally available for streaming on Netflix. The whole cast is back, and perhaps even some characters you might have forgotten about since season two. Remember Lucas Goodwin, the disgraced Herald reporter who ended up in jail? In this season of House of Cards, Lucas Goodwin ends up getting out of prison, and into something a whole lot more complicated. Spoiler alert: if you haven't seen the first episode of House of Cards, spoilers to follow.

Let's recap Goodwin's story very briefly: he was a crime beat journalist turned Editor in Chief for The Washington Herald, investigating the murder of journalist Zoe Barnes — by then Vice President Frank Underwood himself in the shocking season two opener. When Underwood's Chief of Staff, Doug Stamper, gets wind of Goodwin's probing, he arranges an elaborate sting operation that lands Goodwin in prison for seven years on cyberterrorism charges. And that's the last we saw of him in season two, until the very graphic opening of House of Cards season four, when Goodwin spouts off some creative verbal pornography for his cellmate in prison, who um, happens to really enjoy what Goodwin has to share.

It turns out that Goodwin isn't just spinning spunk tales for his prison bestie for the hell of it: the federal government has worked out a deal with Goodwin to use him as an informant to get intel on his cellmate's Armenian mafia superiors. After successfully getting the information they need, Goodwin is placed into "WITSEC" — the Witness Security Program in U.S. Marshall-speak. With an early release from prison, Lucas Goodwin becomes John Carlyle.

The move from prison to his new WITSEC digs isn't as freeing as Goodwin might have hoped. While he's technically out of prison, his new life under witness protection is frighteningly prison-like: No car, no Internet, no outside phone, except one that directly dials his federal handlers. But hey — at least he's got basic cable, so that's a win, I guess? Goodwin goes from investigative journalist to rental car return detailer as Carlyle, in his new life in Dayton, Ohio.

The Ohio location took a few episodes to piece together: Through brief glimpses of the rental car license plates, a newspaper, and when Goodwin appears at a presidential campaign rally later in Ohio (huge plot moment here, so I won't spoil it) — we're able to finally figure out that this bland, nondescript WITSEC location is actually Ohio. But I suppose that's the mark of a good witness protection program if you can't even tell where the protected witness even ended up.

The complete fourth season of House of Cards is available now for streaming on Netflix.