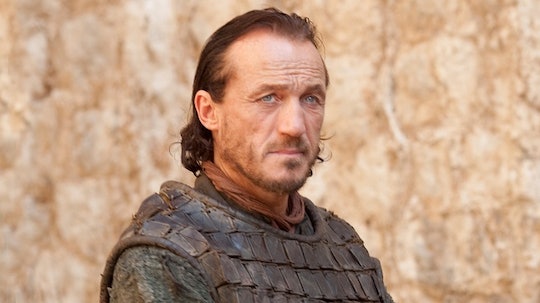 Where Has Bronn Been On 'Game Of Thrones'? We Last Saw Him In Dorne

Remember Bronn from Game of Thrones? He was an easy fan favorite when he stepped in at the Vale and fought as Tyrion's champion in the youngest Lannister's first trial by combat. Then, he left with Tyrion, furthering his place as not only a pretty great fighter to have by your side, but also a fun travel companion. But where is Bronn on Game of Thrones now? The last time we saw him, he was leaving Dorne with Jaime, but has been noticeably absent from Season 6 so far.

Going back to Dorne real quick, we can also look fondly on him being almost murdered by the Sand Snakes, but providing viewers with the first look at the poison that would later kill Myrcella on the ship ride home. Let's not rehash that awesomely bad quote from one of Tyene Sand, the Sand Snakes about Bronn wanting a good girl but needing bad... you remember. Moving right along.

When Jaime arrived in King's Landing and met Cersei at the shore, Bronn was nowhere in sight. Before Bronn accompanied his newest Lannister best friend, Jaime, to Dorne, he'd been the one to retrain Jaime how to fight using his good/only hand, and in secret no less. So when Jaime finally came home, seemingly sans Bronn, fans were all like, "What?"

In the new images for Season 6, Episode 7 of Game of Thrones titled "The Broken Man", we see Jaime in full battle garb, with his old friend Bronn right by his side. Jaime was on his way to Riverrun to deal with the whole mess of Catelyn Stark's uncle, Brynden, a.k.a., Blackfish, for taking back the land that was rightfully his. Also on their way to Riverrun are Brienne and Podrick, so that reunion alone will be interesting for viewers to witness.

But between the end of Season 5 and the premiere of Season 6 of Game of Thrones, where has Bronn been? We all remember his dreams of finding a wife and castle of his own to live out his days happily and quietly, so fans no doubt assumed that that's where Bronn has been for the first half of Season 6. But judging by the promo for Episode 7 and the photos especially, Bronn is back and ready to have his BFF's back since the guy is nothing if not loyal.

Chances are, the newly knighted mercenary was just laying low in King's Landing or even Flea Bottom. Or, with the local brothel shut down, maybe he was hanging out somewhere nearby until he was needed, enjoying the fruits of his labor from back in Dorne. The best assumption is that now Jaime will send for him and that's how Bronn will appear in Episode 7, ready to fight by his side as the former Hand of the King requires.