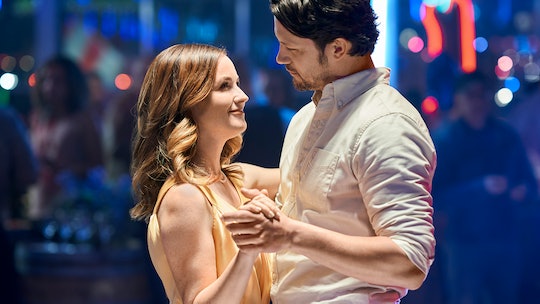 Nothing screams summer romance quite like The Hallmark Channel. Kicking off the network's Countdown to Summer series is A Feeling of Home, an original film starring Baby Daddy's Jonna Walsh and Roswell, New Mexico's Nathan Dean Parsons — and boy, is that accent working for him. From the looks of it, the Hallmark film is a far cry away from The CW hit series. So naturally, fans are probably wondering where A Feeling of Home is set. As it so happens, the setting for the movie is more important than you might think.

According to The Hallmark Channel's synopsis for A Feeling of Home, the new film follows Abby Cooper (Walsh), a Texas native who works as a host of a New England web series. Abby has dreams of launching her own line of home products, but she must return to the heart of Texas to help at her dad's ranch after he injured his shoulder. Turns out, her high school boyfriend, Ryan (Parsons), is her dad's new ranch manager. And of course, he's still as handsome as ever in Abby's eyes. When sparks start to fly between Abby and Ryan, the web host becomes torn between her Texas roots and her New England dreams. Which will she choose? You're going to have to wait and see.

In a special "on location" look at A Feeling of Home, Hallmark went behind-the-scenes of the set to speak with the cast and crew. In the clip, the network shared that A Feeling of Home is set in Langston, Texas, which — in case you were wondering — isn't a real city.

Later in the clip, Parsons revealed that A Feeling of Home's location was an important aspect of the film's core and the message it is trying to tell.

"I would describe this movie as primarily a love story, but a love story not only for two people, but between a place and a family and a culture," Parsons said.

The location of A Feeling of Home also has a big of significance to Parsons. In an interview with The Hallmark Channel, Parsons shared that he grew up in Texas.

"Growing up in that environment, I rode horses, I was around cattle, and I knew livestock really well. I knew the food and barbecue, and that is a huge part of this film," Parsons revealed.

The network then aired a sneak peek clip from the film featuring Abby and Ryan flirting, all while Abby is... feeding a baby calf some milk. No, Parsons certainly wasn't lying when he said that Texas culture would be highlighted in the film.

Nonetheless, as Ryan exits the scene, the clip ends with Abby leaning down at eye-level with the calf. "How did I ever let that one go?" she asks. And that, ladies and gents, is the moment.

With a whirlwind romance, adorable animals, and plenty Texas barbecue, A Feeling of Home will fit right in with The Hallmark Channel's Countdown to Summer series.

A Feeling of Home premieres May 11 on The Hallmark Channel.