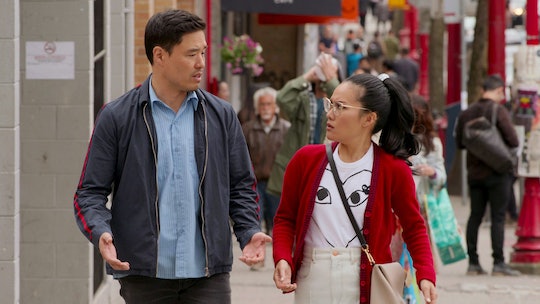 I admit it. As an Asian-American, I never thought that I would see a romantic comedy featuring leads who looked and sounded like me — much less two. Following the box office success of Crazy Rich Asians, Netflix is releasing Always Be My Maybe, which stars Ali Wong (Baby Cobra) opposite Randall Park (Fresh Off the Boat) as childhood friends who reconnect after 15 years. But given the varied locations throughout the film, fans may be wondering where Always Be My Maybe is set. Turns out the Netflix rom-com jumps to three major U.S. cities.

According to The Hollywood Reporter, the Nahnatchka Khan-directed movie was filmed in Vancouver and San Francisco, which started in May 2018. However, the Los Angeles Times revealed that Always Be My Maybe takes place in Los Angeles, San Francisco, and New York. That being said, the film's locations account for the long separation between the lead characters. Per Netflix, Always Be My Maybe follows childhood friends Sasha (Wong) and Marcus (Park) who had a falling out that divided them for 15 years. Now, Sasha is a celebrity chef in Los Angeles, but when she returns to her hometown in San Francisco to open a new restaurant, she finds Marcus, now a musician who still lives at home and works for his father. Although both parties are hesitant at first, Sasha and Marcus rekindle their friendship — and maybe something more.

For those of you who don't know, Always Be My Maybe not only stars Park and Wong, it was written by the duo, too. In an interview with Bustle, Khan revealed how the movie came together.

"[Ali and Randall] had this idea forever," Khan said. "And we all started talking about how much we loved [When Harry Met Sally], and what a great rom-com that was because it was a true two-hander. It was 50/50, equally weighted. You cared about both Harry and Sally, and how that's really challenging to do."

According to the New York Times, Wong and Park also had another film in mind when creating Always Be My Maybe — the 1992 comedy, Boomerang.

“It was a movie about black people in this elite business world, but it wasn’t harped on. It was just the reality of their lives,” Park told the publication. “And I think that spoke to us.”

Park and Wong then took their inspirations from When Harry Met Sally and Boomerang and created their own version, not only for themselves, but for the people who looked like them.

That said, the charm of Always Be My Maybe is in the details. From the many uses of kitchen scissors to kids kicking off their shoes as they enter the home to enticingly delicious-looking Korean meals, the Netflix film places culturally significant mannerisms front and center. Speaking with the New York Times Khan touched on the significance of doing so.

“It was very important to get those details right, especially in the beginning with the childhood stuff,” Khan said. “Those things matter. It’s like, ‘Someone is seeing me!’”

Always Be My Maybe premieres May 31 on Netflix.