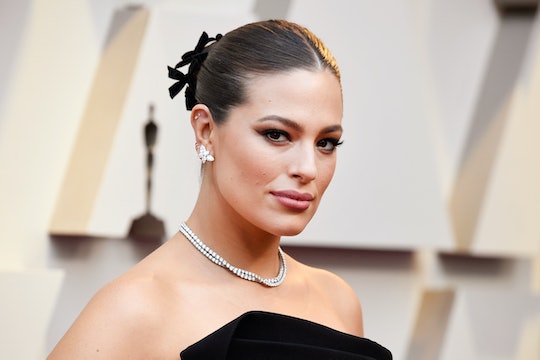 Fun Fact: Mom-To-Be Ashley Graham Spent Her Summers As A Kid On A Farm

As one of the most beloved, admired, and recognized models in the industry today, it might be surprising to hear that where Ashley Graham is from isn't a bustling fashion capital like Paris, New York, or Milan. Indeed, the 31-year-old Sports Illustrated model and body positivity advocate hails from the Midwest.

Graham — who recently announced she's pregnant with her first child with her husband, Justin Ervin — was born on Oct. 30, 1987 and grew up in Nebraska, according to Biography. In middle school, when she was about 12 years old, she and her family moved to the state's capital of Lincoln, as she shared on a 2018 episode of her podcast, Pretty Big Deal with Ashley Graham. "I moved to Nebraska when I was in eighth grade," she said, adding that because she moved there at this age, she missed out getting to love one of the state's biggest pastimes: football, specifically the Nebraska Cornhuskers.

"It wasn't ingrained in me. Like, 'Go Big Red!' wasn't whispered in my ear as I came out of my mother's vagina," Graham hilariously shared on her podcast. "What my mom and I would do is we would go to the mall when there was a football game because we knew no one would be there."

And, as it turns out, it was the mall that helped jumpstart Graham's modeling career. In 2000, according to The Hollywood Reporter, while she was out shopping at the mall, possibly with her mom, Graham was discovered by the modeling agency, I & I Agency, which is based in Kansas City, Missouri. And just a year later, when she was 14 years old, she signed with Wilhelmina models, according to the Oprah Magazine.

Graham shared on her podcast that she left Nebraska at 17 years old to fully pursue her modeling career. And, as they say, the rest is history. In 2016, Graham appeared on the Sports Illustrated swimsuit cover and was included in Forbes' 30 under 30 issue. And in 2017, Graham became the first plus-size model to cover Vogue.

But even though Graham has a booming modeling career that takes her all over the world, she's still very much loyal to her roots in Nebraska. And while she didn't spend her entire childhood there, it seems there was one experience in particular that helped shape her identity. "I was raised on the farm in the summers, so I'm like a real Nebraskan," Graham shared on her podcast in 2018.

Graham even traveled back to Nebraska to go wedding dress shopping so she could buy her gown with her mom and grandmother, as she previously told Harper's Bazaar.

The Nebraska native has accomplished a whole lot in just 31 years and things are only about to get even more exciting as she prepares for the arrival of their first child. And, thankfully, she's found the best partner to join her for the ride. "Nine years ago today, I married the love of my life. It has been the best journey with my favorite person in the world! Today, we are feeling so blessed, grateful and excited to celebrate with our GROWING FAMILY!" she shared on Instagram as she revealed her pregnancy news. "Life is about to get even better."

Graham and Ervin's bundle of joy will undoubtedly be loved near and far, though an ingrained love of Cornhuskers football probably isn't much of a guarantee.