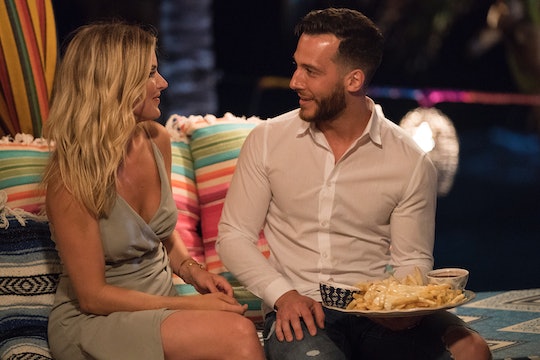 Ever since The Bachelor Winter Games premiered earlier this year, fans of the franchise have been increasingly interested in the smooth-talking, French-accented Benoit. But where is Benoit on Bachelor in Paradise from? Despite the French music that plays whenever he does something adorable or charming, he is not, in fact, from France.

It turns out that Benoit actually hails from the Great White North — Montreal in Québec, Canada. Just in case the name Benoit Beauséjour-Savard didn't give it away, he is French-Canadian and he spoke a little bit of French on the Winter Games. So I guess you get a pass if you thought he was originally from France, as many both on and off the show seemed to.

He may have travelled to the United States for the Winter Games and then to Mexico for Paradise, but Benoit is still Canadian through and through. In fact, he recently advertised a Goodfood box on his Instagram — basically a Canadian Blue Apron. So if he does find love in Paradise, then the couple will have to decide whether to live in Canada or not. Hey, it could be worse.

After The Bachelor Winter Games, Benoit famously proposed to fellow contestant Clare Crawley on stage at the reunion finale special. Unfortunately, the couple broke up not long after. At the time, Clare and Benoit posted a statement on Instagram announcing their breakup. They both said neither harbored any ill will toward the other, despite breaking off their short-lived engagement.

"We think the world of each other, and we were both hoping we could make this work. I'm sorry that this may not be what you want to hear, but it's our truth," Benoit wrote in his statement on Instagram. "Just know there are no negative feelings here, we are simply two people who believed in love, and were open enough to give it a chance."

Luckily for fans who came to love him on the Winter Games, he returned to the franchise to try and find love yet again. And that meant traveling all the way from Québec to Mexico.

Shortly after his breakup with Clare in April, Benoit spoke to Narcity and said that at the time, he was still living in Montreal. But he seemed open to the possibility of finding love again, even on reality TV on a Bachelor show, just as long as he was fully recovered from his last relationship. "[The breakup] doesn't mean I am giving up on love because I’m sure there is my special someone out there that I will meet one day," he said at the time.

On reality dating shows like BiP, the logistics of dating someone who lives thousands of miles away from you is always the biggest hurdle I see for these couples. Even if they leave the show madly in love, it can be difficult to work out a long distance relationship after spending literally every day together in Paradise. And if they're going to make it work, somebody is going to have to relocate. Let’s just hope that Benoit can find someone that he can make it work with this time around.