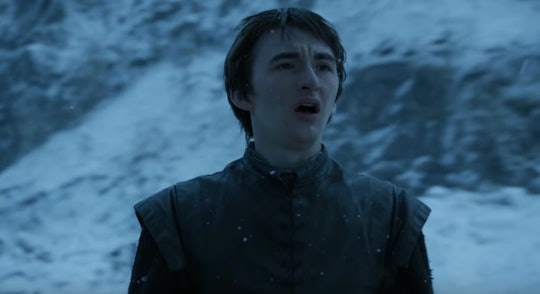 Where Is Bran In 'Game Of Thrones' Season 6? He's Been Missing

With all of the craziness that went on during Season 5 of Game of Thrones, there was one character and Stark kid that was noticeably missing. And no, I'm not talking about Rickon. Poor Rickon, the forgotten Stark son. I'm talking about Bran Stark, though, who was sadly missing from last season but will be making a brand new return this season. That's right. Bran Stark will be in Season 6 of Game of Thrones, and not a moment too soon, given his cultivated powers that are going to enable us to see into the past for the first time.

During his time off-screen, showrunner David Benioff made it clear that Bran has been training with the three-eyed raven we last saw him with at the end of Season 4, working to perfect his warging abilities and powers to see into the past. According to Entertainment Weekly, Benioff said, of Bran:

"It made sense to stop where we did. He’s now entering a training period which is going to take quite some time, much of which isn’t particularly cinematic. So rather than being stuck in a cave for a year, we figured it would be interesting to leave him out for a little bit."

Which makes sense, so we can’t really blame them for keeping Bran from us for so long. The weirdest part though, because three-eyed ravens and mystical powers are far from weird in the world of Game of Thrones, is that when we do see Bran in Season 6, he will look almost unrecognizable in his very matured body and hey, without that painful bowl cut.

Given that Bran is returning now, we can only assume/hope/wish that Bran will be serving the purpose of showing us part of Robert's Rebellion, which took place when Ned Stark was just a teenager himself, alongside Robert Baratheon.

So while Bran has definitely been M.I.A. while his fellow Stark siblings made their marks all over the Seven Kingdoms, I am sensing a reunion of sorts in Season 6 of Game of Thrones, as Sansa comes into her own for the first time, like, ever, and Arya hones her ability to change faces and worship the Many Faced God. And if we're honest, now, more than ever, with the shortage of Stark kids, we need Bran's return in Season 6 and for things to be on the up and up for the Starks for the first time since before Ned and the girls left Winterfell. Yeah, that long.

Bring on the flashbacks, please, the North remembers.