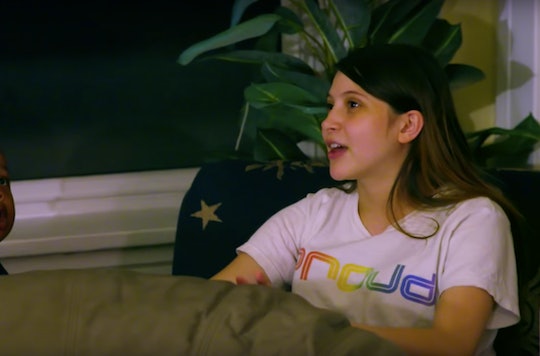 Young & Pregnant, MTV's Teen Mom spinoff, follows the lives of five young women as they navigate pregnancy and often tumultuous relationships. Because the show touches on some real life struggles, it can sometimes be difficult to watch. After seeing part of one Young & Pregnant star's story as she learned about her baby's disability, and worked to repair her relationships, fans want to know: where is Brianna Jaramillo now?

Brianna Jaramillo appeared on Teen Mom: Young & Pregnant after becoming pregnant at 17. In her introduction video, Jaramillo stated that the father of her child had made the decision to not be involved in the baby's life. As a result, part of Jaramillo's journey involved exploring her relationship with Danae, a young transgender man. In addition to navigating relationships, Jaramillo obviously had a lot to prepare for with a baby on the way.

During an ultrasound, Jaramillo's doctor discovered a birth defect. As Jaramillo recalls in her introduction video, "they said that they cannot find his left forearm and hand. It was something that made me really sad because the first thing I could think about was that one day this child is going to look up, and he's going to be like, 'Mom, why am I different?'"

In late August, Jaramillo gave birth to her son, Braeson. Jaramillo and Danae discussed how they hoped the latter's experiences would possibly help in raising a baby. "I feel like we are connected like, way more because of his arm and me being trans," Danae told Brianna, according to Starcasm. "Like, I could help him and show him that...there's so much more to this world than people who are judgey."

Some might be wondering: where did the name Braeson come from? It's definitely pretty unique and the story behind it is adorable. Jaramillo explained that the couple decided to name their son Braeson because it was a combination of "Brianna" and "Danae." Jaramillo also said that no matter what happened in their relationship, Danae would always be Braeson's father, and his family would be her family.

Danae's family did appear on the show, when the young couple went from Wisconsin to Danae's native Chicago to visit. They seemed really nice and welcoming.

Although many were hoping Jaramillo and Danae's relationship would pan out, it seems that's not the case. Watching reality television makes it easy to get caught up in a couple's life and Young & Pregnant didn't shy away from airing the ways each couple struggled. Jaramillo's intro video openly discusses her and Danae's on-again-off-again relationship.

However, Jaramillo's public profile suggests that she has a new boyfriend; there are plenty of pictures of the young couple with Jaramillo's son, Braeson. So, while fans might want to mourn Danae and Jaramillo's relationship, they can also send good energy toward this new one.

And when it comes to baby Braeson, Jaramillo recently spoke about her baby and his disability with People.

Pictures of Braeson dominate Jaramillo's instagram and he's honestly such a cute baby. Even though some things have changed since the show ended production, it seems that at the end of the day, Braseon and his mom are doing well — and that's what's ultimately important.

Jaramillo only recently turned 18, so it's completely normal for relationships to come and go. It's can be hard enough navigating life as a young mom; there's definitely stress added when your personal life becomes open to examination. Hopefully, Jaramillo gets to have plenty of time to enjoy motherhood and her adorable baby boy.