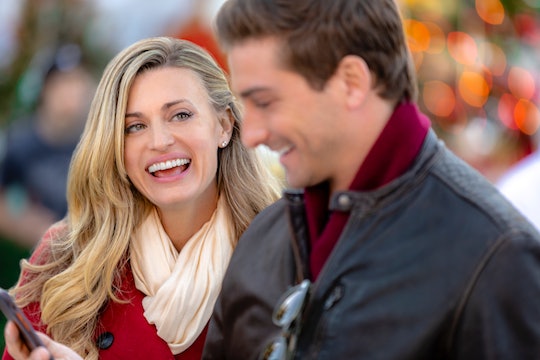 If you're a fan of Hallmark Christmas movies, you're in luck. In honor of the holidays this year, the channel is bringing 22, yes 22, brand spanking new holiday movies to a TV screen near you. Hallmark actually started airing the films in late October, but one film premiering this weekend already has fans people talking, wondering important things like: Where is Hallmark's Christmas in Love set?

Christmas in Love tells the story of Ellie Hartman (Brooke D’Orsay) and Nick Carlingson (Daniel Lissing). Ellie lives in a small fictional town called White Deer, where she works at Carlingson Bakery. (Notice how his last name is the same name as Ellie's bakery? Stay tuned for more on that...)

It's unclear so far what state White Deer is supposed to be in, but it seems to be somewhere in the United States that has very cold winters. In a behind-the-scenes video Hallmark shared on YouTube, Lissing shows viewers how the set dressers turned the warm-weather set into the ultimate winter wonderland. Though I can't imagine the actors were too thrilled about that, because they all had to wear coats while the crew was in T-shirts! But luckily, many of the film's scenes also took place inside of Carlingson Bakery, away from the warm weather.

In Christmas in Love, Carlingson Bakery is known for its Christmas Kringles, which are snowflake-shaped pastries that are all shaped a little differently, much like real snowflakes. "Each one is a snowflake. No two Kringles are alike," Ellie tells Nick in the movie, as she walks him through the bakery's kitchen. "It's what people have come to expect — unique and made with love. Just in time for Christmas."

Nick is the polar opposite of the small-town Christmas-loving do-gooder Ellie. He is a straight-laced Christmas-skeptic businessman from the big city, who has just been named CEO of Carlingson Bakery. However, Nick doesn't advertise that fact when he arrives in White Deer. Instead, he goes undercover as an executive from San Francisco. He has secret plans for the bakery, which involve automating the business practices, which would result in laying off a bunch of the bakery's employees. Nick keeps that little fact to himself, until Ellie accidentally discovers the plans on his computer. Dun, dun, dun!

So as her own way of fighting back, Ellie decides to get Nick involved in their old-school baking method. She tries to teach him how to make Kringles (which he seems to struggle with, as I imagine he gets all of his meals delivered in the big city). But as he gets to know more of the bakery's employees and other locals, his harsh demeanor begins to subside. I won't tell you if Ellie and Nick wind up becoming love interests, because #nospoilers — and also because I think you can probably figure that one out for yourself.

Christmas in Love will air on Hallmark on Sunday, Nov. 11, 8 p.m. ET. Here's hoping Hallmark releases the recipe for those Christmas Kringles, because it's going to be hard to make it through the movie without eating one.