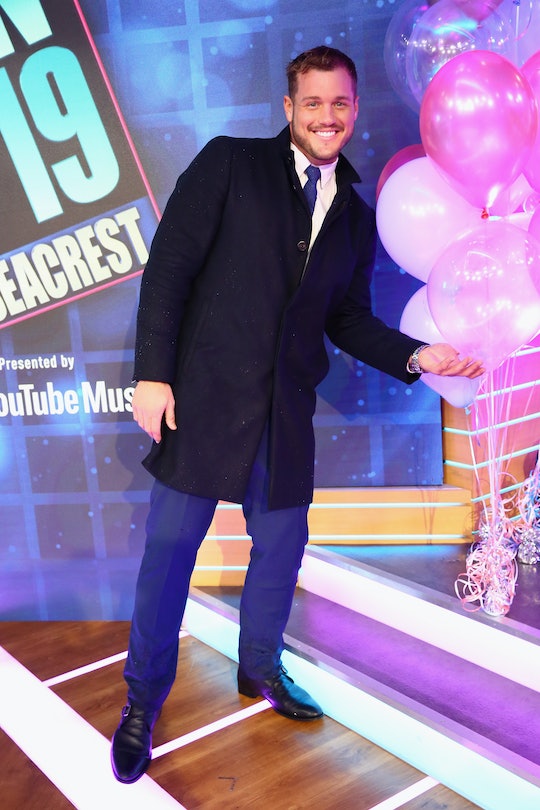 We're Still Not Sure About Colton's Relationship Status After 'The Bachelor'

If you're not talking about the latest episode of The Bachelor — and that fence hop — are we even friends? Whether you're all caught up on the latest Bachelor drama or not, it's no secret Season 23 has been filled with the "most shocking" moments in most of the Bachelor franchise. You can thank Colton's virginity, his sudden exit from set, and his mega-strong feelings for Cassie for an exciting season. But it leaves fans wondering where Colton is after The Bachelor. Where did he go after he hopped the fence? Is he engaged? And more importantly, how the heck did cameras lose him in the wilderness after the fence thing? I mean thanks for great TV, but how?

If you've seen Colton on Ellen, or any of the many promotional TV interviews he's done in the weeks since the announcement he'd be the Season 23 Bachelor, then you know he's not about to spoil the ending. The old "I'm the happiest I've ever been" is one way to answer a question by not actually answering it. You can't blame the guy because to tell you what he's been up to would give away what happens in the most ~dramatic~ season finale ever. Once that box is checked, you can't uncheck it.

Obviously, the guy seems happy, regardless of how Season 23 ends. That could mean he pursues Cassie for a non-engagement relationship, ends up breaking up with all three final women, or he ultimately decides Hannah G. or Tayshia would be better suited for him. Watching him pour his heart out to Cassie and having her reject him was hard, but knowing how he feels, saying she's "the one" and seeing him attempt to reconcile one of the other two relationships would be harder. But there's no indication Colton walks away from the show, whether due to contractual obligations or because he realized he owed it to the others to go on.

He recently opened up to Us Weekly about why he didn't quit saying, "You see that, obviously, the story goes on and the show goes on and I think that I had a realization, 'Life is not fair' to myself. And I had a very important conversation with Chris [Harrison] about that [is,] … 'Where do we go from here?'"

If you're left wondering what did happen after Colton hopped the fence, it seems as though the production team were on the verge of calling the police to track the former pro-football player down. Harrison added in the same ET interview, it was "unlike anything we'd dealt with before." He went to add, "For the first five minutes [after he jumped the fence], I thought, 'We're clearly gonna find him. It's not that big of a deal.' And then we didn't."

If you're still left wondering where Colton is after The Bachelor, I say give it time. Until the finale airs, he's not going to give much else away. Unless you scour the spoilers, you'll see fairly soon what he's been up to and whether or not he's engaged. Either way, the only thing people will remember is the fence jump, so there's that.