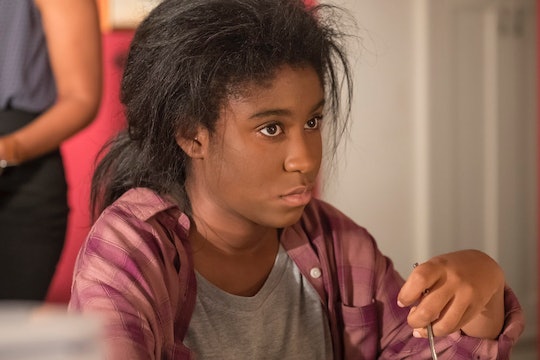 Deja's Dad Is Completely MIA On 'This Is Us'

Deja was only introduced on This Is Us a few episodes ago, but much like Beth and Randall, most fans are dying to know more about her, including details about her past. It’s been brought up more than once that her mom is in jail and could be facing serious jail time, but where is Deja’s father on This Is Us? Randall is doing his best to fill those shoes, but like Deja’s birth mother, you have to assume that she had a dad at some point and might still have one floating around in the supporting characters ether.

So far, there's been no mention of Deja's dad on This Is Us. The only father figure she's talked about is the boyfriend of a former foster mom. As she told Randall in the bathroom of the hospital fundraiser on This Is Us last week, part of her flinching stems from being hit with rolled up magazines by her former foster mom's boyfriend. According to Deja, she and the other foster children of the home would laugh at the fact that the foster mom (who wasn't much of a looker, according to Deja) received beauty magazines in the mail. To punish the kids for laughing, the boyfriend would use said magazines to hit them — an act which Deja pointed out left the least amount of bruises behind.

But as for Deja's biological father, he's even more mysterious than her mom, since viewers haven't gotten to get a good look at either of them. But that doesn't mean there aren't a few possible explanations to satisfy those This Is Us fans who are clamoring to know more about Randall and Beth's foster child.

The primary reasons for kids being placed in foster care have to deal with a substantial amount of abuse or neglect where the safety and cleanliness of their living conditions as well as food and general care are concerned. Since Deja’s mom is in jail and therefore unable to care for her, she was placed in foster care for what viewers now know was not the first time.

But that also means her dad wasn’t around to care for her in her mom’s absence, so where is Deja’s dad then? Her mom has committed crimes in the past, which is why Deja seems to know the drill of a short jail sentence and then a return home. But if her mom has a criminal past, then there’s a chance that her dad does too and he could be incarcerated right now.

It’s also possible that Deja’s dad doesn’t even know about her. If it’s always been Deja and and her mom together, whoever her dad is could have left before she was even born. This also opens the door for a future scenario of Deja trying to find her birth father, much like Randall tried to find his birth mother as a teenager in a heartbreaking This Is Us flashback scene.

While Deja told Randall that her past of abuse in foster care is where her flinching comes from, she may have also been abused by her dad and, as with some broken families, he could be someone who comes in and out of her life at different times. Although my own parents were divorced for my entire childhood, they were both alcoholics and co-dependent on each other. Even though he wasn’t a father in any sense of the word, my dad would habitually drop in and out of our lives.

This could easily be the case with Deja’s dad, which might be why there’s only been mention of her mom so far. And if this is the case, he could show up somewhere down the line, see the home she’s living in, and insist that Deja take advantage of Randall for personal gain.

Right now, there are a number of places the writers could take the storyline of Deja and her parents on This Is Us, but chances are, the questions about Deja’s mom and dad probably won’t be answered until she’s finally settled in with Randall and his family. Once she trusts them a bit more, new details about her past are sure to surface.