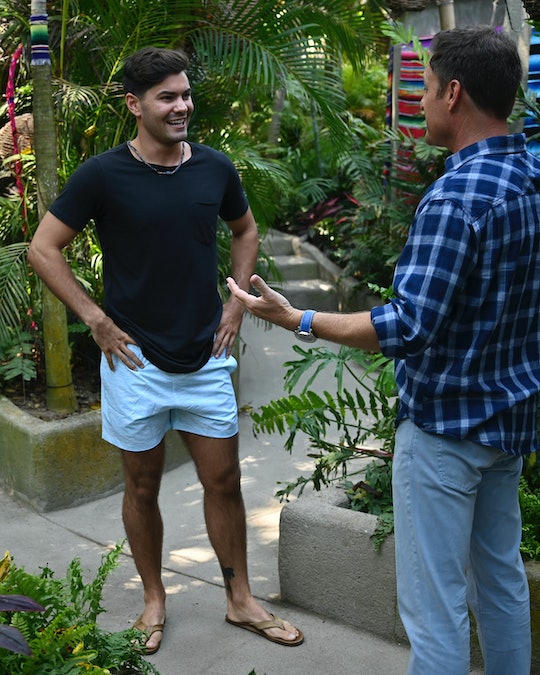 Dylan On 'Bachelor In Paradise' Has Strong Ties To His Family

Despite being one of Hannah’s 30 contestants on The Bachelorette Season 15, there’s a lot that fans might not know about Dylan, who also happened to be one of the first guys to arrive on Bachelor in Paradise this season. He was given an intro video on The Bachelorette and he made it as far as week six, but most of the season’s drama overshadowed any important moments he might have gotten with Hannah. Now, some fans are wondering who he is and where Dylan is from on Bachelor in Paradise.

When he was introduced on The Bachelorette, he was based in San Diego, Calif. where he’s also from, and he still resides close to home. It could have something to do with the business he and his cousin started, called Vizer, which is a fitness app which tracks your workouts and enables you to turn those workouts into local meal donations. Just in case you needed further proof that Dylan is one of the more genuine guys this season, there you go.

So when Dylan was asked to join other members of Bachelor Nation in Mexico for Bachelor in Paradise Season 6, it probably wasn't a long trip for him. Now, it could be the thing to turn around his experience in the franchise and help him find true love — or at least something close to it.

According to Dylan’s LinkedIn profile, he grew up in the San Diego area, where he went to the Chadwick School for his high school years. The private k-12 school has tuition rates upwards of $30,000, so there’s a good chance he got a quality education before he migrated to Williamstown, Mass., where he earned his Bachelor’s Degree in Englsh language and literature with a minor in leadership studies at Williams College. Afterward, he made his way back home, where he worked in finance before he co-founded Vizer with his cousin.

Judging by Dylan’s Instagram, he is close to his family, which could be the reason why he prefers to stay close to his hometown. With his business also based in the area, it gives him all the more reason to stay put rather than settle down anywhere else, at least for the time being.

If Dylan and Hannah work out this season on Bachelor in Paradise, one of them might need to consider relocating. Hannah’s hometown is in Alabama, but the modeling agency she is signed with is based in Nashville. Either way, it’s a hike from San Diego. Luckily, Bachelor Nation stars usually have the means to entertain super long distance relationships until they can figure out a plan and that could mean Hannah and Dylan will just split their time between their separate locations.

Hannah did recently post a mysterious photo at a hotel in California with her hand and the hand of an unidentified man, each holding a glass of champagne. It’s possible that Hannah and Dylan are already doing the long distance thing and she is spending some time in his neck of the woods for a while. Since Bachelor in Paradise Season 6 only just premiered, that’s all speculation. With the way they already hit it off and shared their adorable first kiss, however, I can dream.

If they do make it out of the season engaged or at least still together, they will have a few tough decisions to make, especially since it seems like Dylan would prefer to stay close to home for the foreseeable future. For now, let’s just hope Blake or a newcomer to the season doesn't come between them. Bachelor in Paradise airs Mondays and Tuesdays at 8 p.m. ET.