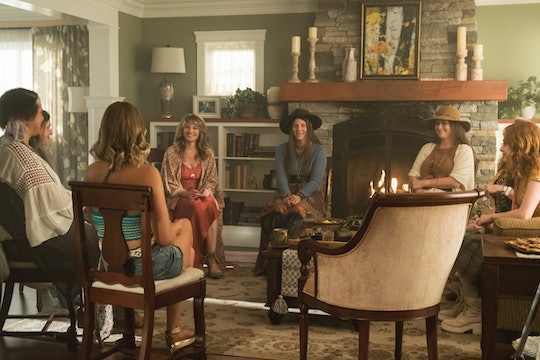 While the Gargoyle King and Hiram Lodge are front and center in this season of Riverdale, there is one lingering mystery that still needs to be unwrapped. The Farm cult has had a discreet, yet ominous presence on the show, and it’s mysterious leader, Edgar Everner has yet to be seen. Alice and Polly talk about him all the time, but exactly where is Edgar Evernever on Riverdale?

As of now, it seems like Edgar is still hanging out at the Farm, which is located somewhere north of Riverdale. So far, he’s been puppeteering Farm members from behind the scenes, but it look like he’ll be making an appearance soon enough. According to Entertainment Weekly, One Tree Hill actor Chad Michael Murray was cast as Edgar Evernever, and he should show up at some point during Season 3.

“As the enigmatic leader of the cult-like Farm, Edgar arrives in Riverdale to spread his teachings and heal the ravaged soul of this once wholesome town,” reads Edgar’s official character description. “Edgar is a charming, handsome guru, but is he hiding a more sinister agenda?” After hearing Alice, Polly, and Edgar’s daughter, Evelyn spout his cultish lingo, Betty sure as hell believes that he’s up to no good.

But now, Betty has an even bigger reason to suspect that Edgar has ulterior motives. In episode 10 of Season 3, Betty realizes that her entire savings account — which included money for her college tuition — was completely drained. Apparently, Alice forged Betty and Hal’s signatures and emptied Betty’s bank account at the instruction of the Farm. When the Farm members, including Evelyn and Alice gather at Betty’s house, they tell her that the Farm needed the money to buy the now defunct Sisters of Quiet Mercy building so that they could house all their members, including the women Betty helped save from the Sisters.

“The farm has found and bought its new headquarters, the convent where the Sisters of Quiet Mercy used to live. Thank you so much Betty,” Evelyn says. “Thanks to your generous contribution Betty, all of us including those lost souls you saved will benefit with a new permanent home in Riverdale. Just the dawn of a new era for the Farm.” While Evelyn thanks Betty for involuntarily giving up her entire savings, Alice tells Betty that she got a new reporting job, thanks to Edgar’s connections.

In an interview with Hollywood Life, actress Mädchen Amick (who plays Alice Cooper), revealed that with her new job, Alice will be acting as a mouthpiece for Edgar, and she’ll use her position to get info on everyone in town. “I just love the opportunity that Alice just with her job can now start to get even deeper and see what’s really going on, what’s going on with Hiram, and she’s going to do some reporting and some good propaganda for The Farm,” Mädchen said. “But it gives a really good opportunity for her to dive deeper and uncover some stuff.”

With the Farm headquarters moving to the Sisters of Quiet Mercy in Riverdale, it shouldn’t be long before fans see Edgar Evernever waltz into town. He seems to be creeping his way into the limelight, and I’m sure his debut will be well worth the wait.

New episodes of Riverdale air Wednesdays, at 8 p.m ET on The CW.