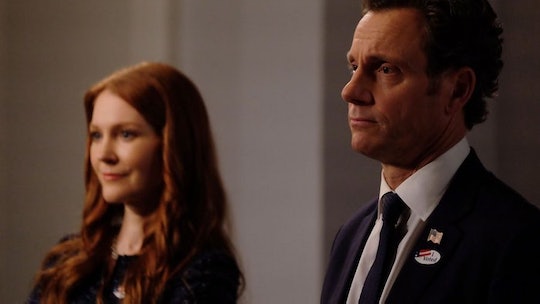 The beginning of the end has finally begun for Scandal, which means the return of all of your favorite white and black hats of Washington, D.C., but the former president was noticeably absent from the Season 7 premiere. So, where is Fitz on Scandal? Season 7 won't be the same without the two-term TV president, though you have to expect that he'll be showing up at some point this season. True, Fitz is no longer the president and since he's also no longer married to Mellie, he really has no place in the White House, so when Fitz comes back to Scandal, it's going to have to be for a good reason.

Tony Goldwyn (Fitz) hasn't said much about Fitz's return this season, but he did confirm a future for Fitz and Olivia on Scandal when he spoke to Deadline at the end of Season 6. "I feel like there’s another round that [Fitz and Olivia] need to go that’ll deepen their relationship even further," Goldwyn said. "I don’t know if they should be together or not, you know, because I don’t know if the circumstances of their lives will allow that, but I know they can’t be apart."

So Fitz is more than likely going to be back, but it's really a matter of when at this point. According to Goldwyn's latest tweets, though, it will be well worth the wait.

The entire Season 7 premiere of Scandal went by without a real sighting of Fitz, which no doubt has fans asking where Fitz is on Scandal and worrying about the former president's fate now that he and Olivia are no longer a thing and he and the Oval Office are also no longer attached. Ok, so there was a photo of him on the news channel on Olivia's TV, but does that really count?

The last we saw of Fitz, he was leaving the White House to work on his presidential foundation in Vermont, and as it was something he seemed passionate about, maybe Fitz's return to Scandal will have something to do with his new organization. For right now, though, for all we know he's still in Vermont learning how to fly fish and make jam, as he told Abby at the end of Season 6. But if Scandal is hard to imagine without Olivia, it's almost just as difficult to imagine Fitz never coming back. And even if that means he's not in as many episodes for the final season, all that really matters is that he comes back at all.

During the Season 7 premiere of Scandal, Goldwyn tweeted at numerous fans' worries about Fitz returning and although he didn't make an appearance yet, Goldwyn did reveal that he directed Episode 2, so Fitz's absence for some of the episodes this season might be explained with Goldwyn's behind the scenes work. But if you're still wondering how Fitz is going to fit in now that he's no longer a White House politician, you definitely aren't alone. Goldwyn had similar questions when he spoke to Deadline at the end of Season 6.

"I have no idea what function my character will serve in the show when I’m not president anymore," Goldwyn admitted. "Shonda obviously has something in mind for one more season, so I’m really curious to see what she’s thinking."

Whether Fitz returns to get Mellie behind his foundation or he's secretly working on taking down B613 now that Olivia has reinstated the government agency, his return will come eventually. And since this is the no holds barred final season of the show, maybe I can hope for Olivia to give up the White House for Vermont and jam and happiness. Hey, a girl can dream, right?