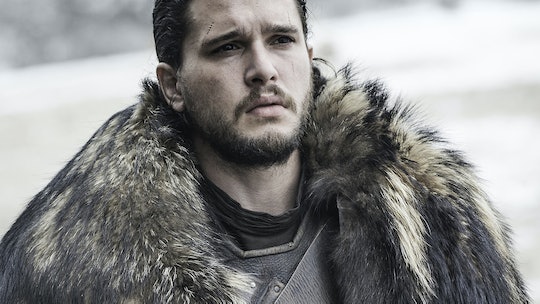 The Game of Thrones Season 8 premiere was a complete and utter disappointment. That is, if you were looking forward to seeing Jon Snow's direwolf, Ghost, who hasn't been on the show for some time. For anyone who needs a quick refresher, fans haven't seen Ghost on the HBO series since Season 6 Episode 2, titled "Home," when he guarded Jon's lifeless body after he died in the Season 5 finale. So forget about the cool dragons and forget about Cersei's obsession with elephants for just a second. Where is Ghost on Game of Thrones? Jon's direwolf better make an appearance in Season 8 or fans — including myself — might riot.

The premiere for the eighth and final season was filled with heartwarming reunions. There was Jon and Arya, the Hound and Arya, Gendry and Arya, Jon and Bran, and Tyrion and Sansa — just to name a few. But let's be real, the only reunion fans wanted to see was between Jon and Ghost. So what? It's unlikely that Ghost died without a proper goodbye on Game of Thrones. Has Ghost just been under an invisibility cloak for three years? I know, wrong universe. My bad. But you can't possibly tell me that the Game of Thrones team spent their staggering $15 million per episode budget on those dragons alone — or can you?

According to Fansided, Cogman explained that he actually wrote a scene with Ghost that was eventually cut out. In the scene, Jon was supposed to pet Ghost on the head and tell the direwolf to take care of Sansa while he went to meet with Daenerys. So, as far as I know, Ghost has been chilling in Winterfell since Season 7.

But why would the Game of Thrones team cut out a scene that would have answered a question fans have been asking about for months? Per Business Insider, entertainment correspondent, Kim Renfro, explained that there was one major reason why Game of Thrones Season 7 didn't have direwolves: money.

"They had to skip the direwolves again for storytelling in all of season seven," Renfro said. "We didn't see a single direwolf because they're a little more expensive to make."

While fans were disappointed about the lack of direwolves in Season 7, Renfo also added that the massive $15 million budget for Season 8 would be going towards bigger battles, dragons, and direwolves. "We're definitely going to get, we know, at least one scene with the direwolf," Renfro said.

Midway between Season 7 and Season 8, The Huffington Post spoke with VFX supervisor Joe Bauer and reported that Ghost will be in Game of Thrones Season 8.

"Oh, you’ll see him again," Bauer told the publication. "He has a fair amount of screen time in Season 8."

While Bauer couldn't go into details about what's going to happen with Ghost in the final season, he did say that the direwolf will play an important role.

“Ghost does show up, and he does some ... he’s very present and does some pretty cool things in Season 8,” Bauer said.

We might have all been ghosted by Ghost since Game of Thrones Season 6, but it looks like the massive budget boost will guarantee at least one appearance before the series comes to an end. Now, we just have to hope that Ghost's big comeback doesn't lead to his death.