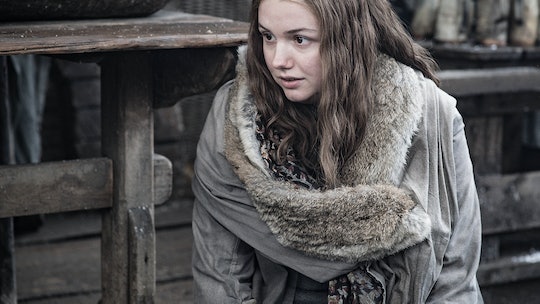 The highly anticipated premiere of Game of Thrones Season 8 was filled to the brim with reunions. While fans cried over Jon's hug with Arya and were left stunned when Bran met eyes with Jaime at the end of the episode, there was one delightful character that was notably missing. Although fans were happy to see Sam and Jon together again, everyone was left wondering where Gilly was on Game of Thrones.

In Season 7, both Sam and Gilly played a small — but important — role for what's to come in the eighth and final season. The couple went to the Citadel with Little Sam, where the Sam discovered that there was an abundance of dragonglass on Dragonstone Island — maybe even enough to help to fight against the White Walkers. Later, Sam and Gilly continued to study and Gilly uncovered the journal of High Septon Maynard. In the journal, Maynard revealed that Prince Rhaegar Targaryen, the older brother of Daenerys, annulled his first marriage and then secretly remarried in Dorne.

Eventually, Sam, Gilly, and Little Sam left the Citadel with a few books stolen from the forbidden library. They arrived in Winterfell, where Sam met with Bran, who revealed that Jon is the son of Rhaegar and Lyanna Stark, Ned's sister. Although the news was shocking, Sam remembered Gilly's discovery at the Citadel and confirmed the story.

In the Game of Thrones Season 8 premiere, Sam tells Jon what they uncovered — that Jon is the true heir to the Iron Throne. And while Gilly did not physically appear in the premiere, during their conversation in the crypts of Winterfell, Sam tells Jon that Gilly is doing well.

Following the premiere of the eight season, HBO released a few promotional photos from the second episode, which currently has no official title.

The images include a few familiar faces, from Missandei and Grey Worm to Daenerys with Varys and Jorah. But among the set of photos were two pictures that confirm Gilly will return in Episode 2. One was a simple still of Gilly all bundled up and the other was a sweet photo of Sam, Gilly, and Little Sam.

While it's nice to see the family back together again, the worried looks on their faces are a little bit concerning. It's possible that Gilly and Sam will have to make a few big decisions soon. The White Walkers are coming and in the Season 8 premiere, Daenerys told Sam that both his brother, Dickon, and father, Randyll, refused to bend the knee and were executed at the hands of Daenerys' dragons. Sam was understandably upset by the news and confronted Jon about it when they met up later in the crypts, but what does this mean for Sam and Gilly moving forward? Will they stay in Winterfell or will they be able to head back to Horn Hill? Fans will just have to wait and see.

It's clear that Gilly has been safely in Winterfell with both Sam and baby Sam at her side. So there's no need to worry about her whereabouts — at least not yet.