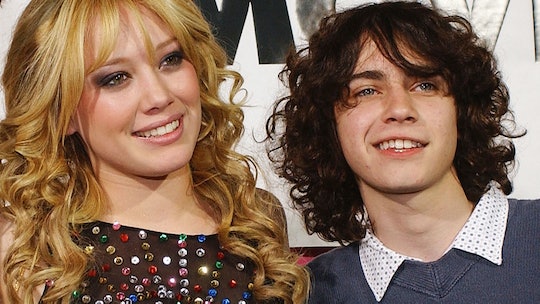 Hey now, hey now — this year is what dreams are made of. Disney announced a Lizzie McGuire reboot during the D23 Expo convention on Aug. 23, and my teenage self is screaming. The studio revealed the revival will be part of the Disney+ streaming service, and while major details about the show's return remain under wraps, Hilary Duff has been confirmed to reprise her leading role. Naturally, fans have been wondering if anyone else from the original cast will be in the reboot, including a certain curly-haired childhood friend. So where is Gordo from Lizzie McGuire now? Adam Lamberg has been out of the spotlight for some time, but fans are hoping the actor will come back for the new series.

For those of you who don't remember, let's take a trip down memory lane. The year is 2003, and Walt Disney Pictures released The Lizzie McGuire Movie, which left fans floored when Lizzie kissed Gordo for the first time after two seasons and 64 episodes of unrequited love and will-they-or-won't-they energy. The film served as the grand finale for the Disney series, and viewers didn't actually get to see Lizzie and Gordo turn into the couple they were always destined to be. But, as of this write-up, it's too early to tell if Gordo and Lizzie are still together in the revival. Duff recently opened up about her character's arc in the upcoming reboot, and it looks like she's settling down into the perfect life. However, the Younger star didn't say much about Lizzie's relationship with Gordo.

When Lizzie McGuire returns, Duff explained Lizzie is now a 30-year-old woman living in New York City. “Right now, her life is framed pretty perfectly," Duff said in an interview with Good Morning America. "She has her dream job [as] an apprentice for an interior designer, who is a pretty big deal. She has a gorgeous fiancé who is a chef at this cool SoHo restaurant. She has a cute little apartment in Brooklyn, and everything is going her way."

Although longtime fans will be happy for Lizzie in the Big Apple, everyone is also hoping Gordo is Lizzie's fiancé. But, it's entirely possible the character won't be involved in the new show. "I can't give away too much away. I have to play coy," Duff admitted when the publication asked if Gordo is still in Lizzie's life. "But there are a lot of surprises in store, and I think everyone's dreams are going to be fulfilled by going on the journey of the show."

Sadly, this means everyone will have to wait a bit longer to see where Gordo is now. It also doesn't help that Lamberg has been somewhat off the grid since he was on Disney. After Lizzie McGuire, the actor starred in When Do We Eat? in 2005 and Beautiful Loser in 2008. He also finished college and worked for the Irish Arts Center, according to Bustle. But does Lamberg's step away from acting mean he won't be in the Lizzie McGuire revival? Only time will tell.

While Gordo's fate on Lizzie McGuire continues to be a mystery, Duff was able to confirm one familiar face when speaking with GMA.

"You're going to experience animated Lizzie as the 13-year-old self that’s still that loud voice inside her head, saying all the things that adult Lizzie would like to be saying out loud," Duff shared. "And that was really important for me to keep her at 13, because I think that’s what’s so endearing and I think everybody relates to that character."

In all honesty, I'm already excited to see animated and adult Lizzie living out their dreams in New York. Nevertheless, my teenage heart will probably be broken if the Lizzie McGuire reboot doesn't include some closure between Lizzie and Gordo. So please Disney, make it happen.

The Lizzie McGuire reboot will premiere on Disney+.