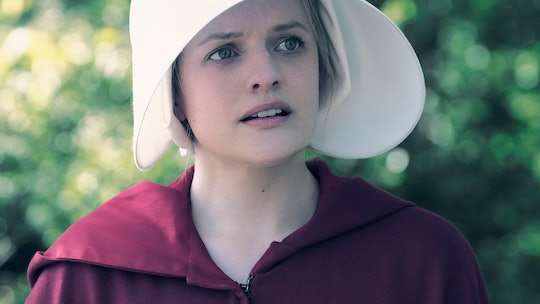 Seriously, Who Isn't Nervous About Hannah's Whereabouts On 'The Handmaid's Tale'?

The Season 3 finale of The Handmaid's Tale broke me. The episode, titled "Mayday," featured scenes that were equally as anxiety-inducing as they were cathartic to watch. But as the credits rolled at the end of the third season, fans were left with a few major cliffhangers and questions, including the location of June's (Elisabeth Moss) daughter, Hannah (Jordana Blake). So where is Hannah on The Handmaid's Tale? The Hulu series has already prepped fans for the upcoming fourth season.

In The Handmaid's Tale Season 3 finale, June and an army of Marthas managed to get over 52 girls out of Gilead. The girls safely reached Canada, where familiar faces like Emily (Alexis Bledel), Moira (Samira Wiley), and Luke (O-T Fagbenle) were waiting with open arms. However, in a scene that broke a hundred hearts, Luke watched as a little girl reunited with her father, causing Luke to look up at the plane in the hopes of seeing his daughter again.

Unfortunately, viewers already knew Hannah wasn't going to get off the plane. At the end of the second season, June made it clear she wasn't leaving Gilead without her daughter. She quickly reconnected with the Mackenzie family's Martha, who was going to help June reach Hannah. But in the seventh episode, "Under His Eye," June's walking partner, OfMatthew (Ashleigh LaThrop), ratted on June. This subsequently caused the Martha's death as well as the Mackenzies to move to an unknown location. As a result, viewers — and June — haven't seen or heard from Hannah since. Nevertheless, The Handmaid's Tale is far from over, and June will hopefully be back on track in Season 4.

Throughout the second half of The Handmaid's Tale Season 3, June's character began devolving after losing hope of seeing Hannah. However, in the finale, one moment made June question herself and her actions, according to creator Bruce Miller. He told The Hollywood Reporter:

She turns around with a gun and points it in the face of a little kid because the little kid's screaming. What does that say about June? A few seconds later, she says, 'My daughter's that age.' She put the gun in that kid's face and it's like, are you killing the thing you're trying to save? If you're trying to save and help all your handmaid and Martha friends, how many of them are going to end up on the wall after this? What exactly are you doing? But here, it's really about what has she done. In that moment, it's about what has she done to herself.

The eye-opening scene also reminded fans of June's reason for staying behind in the Season 2 finale — Hannah. And Miller revealed June has no plans of leaving Gilead without her daughter.

So where does this leave June for the recently renewed fourth season? Although June could potentially get Hannah back, as of right now, it seems more likely the handmaid will try to break Gilead — or at least die trying.

"Everything June's been told was impossible is still very possible and she's just proven that again by doing this thing that is hitting Gilead exactly where they hurt," Miller explained to THR. "I don't think she has much hope that she's going to get out alive. I think she's more there to f*ck up Gilead."

The Handmaids Tale Season 3 is now streaming on Hulu.