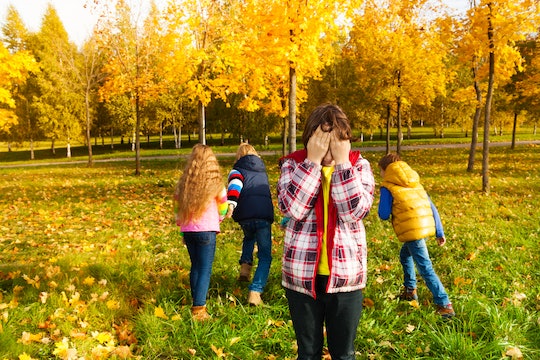 Here's Why Literally Everyone Knows How To Play Hide-And-Seek, According To Research

If you think back to when you were a kid, you probably remember having a great time playing all kinds of games. One of those games was probably the very popular hide-and-seek. It seems like hide-and-seek has been around forever because pretty much everyone has heard of it and knows how to play. You probably even still get that pang of anxiety every time you hear someone say, "Ready or not here I come." But where is hide-and-seek from? It turns out this game has been a favorite since nearly the beginning of time itself.

In the very unlikely event that you don't know how to play hide-and-seek, here's the gist: one player who's "it" closes their eyes and counts while the other players go and find the best hiding spots. When the hiders hear the words, "Ready or not, here I come," they know they're being looked for, so it's time to stay hidden and be quiet. Once you're found (and hopefully you're not), you must come out of your hiding spot. There are many variations to the game, some versions include tagging the hiders as they're found, having the hiders help the seeker find the other hiders once they're found, or having a "base" the hiders have to get to before they're caught.

But the tried and true original? It's old. According to Brittanica.com, hide-and-seek was described by a Greek writer named Julius Pollux in the 2nd century BCE, which is really taking it way back. He calls the game apodidraskinda and describes it as something nearly identical to today's version of hide-and-seek. Today in Greece, hide-and-seek is called kryfto. Pollux was a Greek scholar and rhetorician who rose to success in Athens and Egypt, and he actually isn't the only person to record hide-and-seek throughout history. In Elizabethan England, it is mentioned in this text, except it describes the children using blindfolds. And around the same time, hide-and-seek makes an appearance in Shakespeare's Love's Labors Lost, when he says, "All hid, All hid, an old infant play."

Hide-and-seek is recognizable across many different cultures, as there are many different versions of it. According to Brittanica.com, "In Spain the game is called el escondite, in France jeu de cache-cache, in Israel machboim, in South Korea sumbaggoggil, and in Romania de-av-ati ascunselea. Hide-and-seek is known throughout South and Central America under such names as tuja (Bolivia), escondidas (Ecuador and Chile), and cucumbè (Honduras and El Salvador)," making it universally known and recognizable.

Another version of it exists in Nigeria, called oro, which is played very similar to our version of hide-and-seek tag. Brittanica.com describes oro as "a combination of hide-and-seek and tag in which the seeker stands in the centre of a large circle that has been drawn in the sand and tells other players to hide. The seeker then steps out of the circle, finds, and then chases the other children, who must run into the circle to be safe. The child touched before reaching the circle must be the next seeker."

While it's hard, if not impossible, to know where or when hide-and-seek came from, it's pretty sweet to know that this joy of childhood will be around for a while and no doubt continue to be a popular favorite for our kids and beyond.