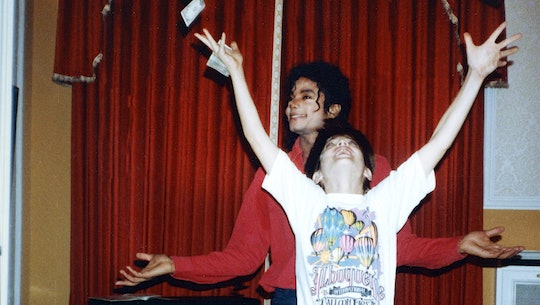 Here's What 'Leaving Neverland's James Safechuck Is Up To Today

Leaving Neverland has been controversial since the moment it was released at the Sundance Film Festival this Jan. In the 236-minute documentary, two adult men, James Safechuck and Wade Robson, allege sexual abuse against Michael Jackson when they were young boys in the '80s and '90s. Now, as the Leaving Neverland HBO premiere date vastly approaches, people are searching for more background on who the accusers are, including where James Safechuck is now.

In 1987, Safechuck was a 9-year-old child actor based in Los Angeles. He first met Jackson on set for Jackson's Pepsi commercial. Afterwards, Safechuck and Jackson formed a friendship and at age 10, Safechuck appeared in Jackson's Bad Tour as a Mini-Me performer.

In 2014, Safechuck came forward and accused Jackson of molestation in the late '80s. Per the International Business Times, Safechuck claimed that Jackson allegedly brainwashed him "into believing that the incidents of sexual abuse were 'acts of love,'" until Safechuck reached puberty. Jackson's estate condemned the allegation and stated, "This is a person that made his claim five years after Michael died, more than 20 years after the incidents supposedly happened and has given sworn testimony that Michael never did anything inappropriate to him.” The case was then dismissed by a probate court in 2017.

Safechuck is no longer in the business of entertainment. According to the LA Times, while Safechuck was in a band that "exploded in a spectacular fashion," he later found himself involved in computer programming. Safeshuck is now the Director of Innovation and Technology at a digital advertising agency. He is also married and the father of two children, including one son.

In an interview with USA Today, Safechuck revealed some of his concerns for his son, who is almost the same age Safechuck was when he was allegedly abused by Jackson.

I have been preparing with a therapist for it many years, seeing him at that age, because you’re really looking at a mirror of yourself. How am I going to deal with that? But I think I’m in as good a place as I can be to not be triggered by it, and enjoy my experience with him as its own experience. It can’t help but make you more protective and conscious of who they’re hanging out with, and what they’re doing. Hopefully this film will do that for other people.

The Jackson Estate has responded to Leaving Neverland, denouncing the documentary since its debut at Sundance. The estate condemned the film as "tabloid character assassination" and called Robson and Safechuck "two perjurers," per a statement detailed in Entertainment Weekly.

The estate also petitioned to stop HBO from airing Leaving Neverland. However, HBO issued a statement, revealing that they would continue as planned. "Despite the desperate lengths taken to undermine the film, our plans remain unchanged," the statement read, according to The Hollywood Reporter. "HBO will move forward with the airing of Leaving Neverland, the two-part documentary, on March 3rd and 4th. This will allow everyone the opportunity to assess the film and the claims in it for themselves."

Per Just Jared, Jackson's estate is suing HBO that seeks "damages proximately caused by HBO’s reprehensible disparagement of Michael Jackson, which could exceed $100 million should HBO succeed in the damage it is intending to cause the legacy of Michael Jackson.”