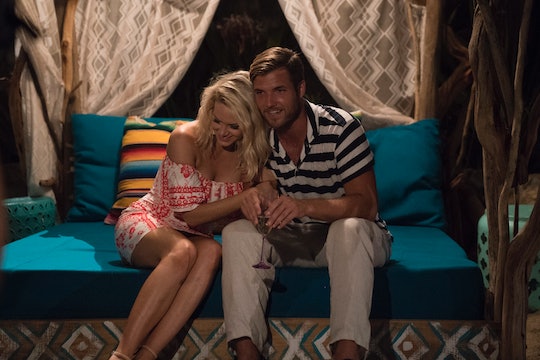 Jenna On 'Bachelor In Paradise' Has Small Town Roots

Some viewers might just know Jenna Cooper for being the contestant who says "it’s about to get coco-nuts" in almost every promo for Bachelor in Paradise Season 5. But she’s also made an impression for being super outgoing and (and desirable) on the show. So where is Jenna from Bachelor in Paradise from? Although she lives in a bigger city now, she’s actually from a relatively small town. According to her Bachelor bio, Jenna is from Upland, Indiana. The 2010 census recorded the town’s population at 3,845, which definitely makes it a small town by the population standards. And physically, Upland is less than four square miles.

It’s unclear when Jenna moved to where she now lives — Raleigh, North Carolina — but she has such a big personality that living in a small town must not have been for her. Even though she didn't get much screen time on The Bachelor last season and some fans might not remember her all that well, Jenna has already made a big impact on Bachelor Nation thanks to BiP Season 5. And she's made a particularly big impact on Jordan.

In Raleigh, Jenna works in marketing. Her LinkedIn profile says that she works as a marketing manager for Orange Theory Fitness, but she also recently founded the Rose Gold Club, a local women’s meet up group. Jenna created the club for local women in and around Raleigh to meet and network while also exploring the city together. Since her work and her new social group keep her in Raleigh and has given her strong ties to the city, it's unlikely that she’ll be leaving to call a new city home anytime soon.

As it stands, it looks like Jenna has only lived in Raleigh for the past couple of years. Although it's hard to say for certain exactly when she moved to North Carolina, she did post on Instagram about "soul searching and job searching" in Raleigh in 2016. She also regularly posts about the Rose Gold club and nearly all of her pictures are tagged to different places in Raleigh. So even if it’s not her hometown, she seems to have laid some strong roots in the city.

Right now on BiP, Jenna and Jordan have a strong connection and they could be endgame material this season. Things haven’t been easy for them as a couple (and he may have thrown an oversized stuffed animal in the ocean out of anger at one point) but they seemed like a perfect match from the start. If things work out for them in the end, it's going to be interesting to see how they make things work out in the real world.

Jordan currently lives in Florida and Jenna is happily rooted in Raleigh for the time being. While they don't have to cross oceans to be together, they don't exactly live close. As with any long distance relationship, Jordan and Jenna would have to make some big compromises if things are going to work out between them once the cameras have stopped rolling for them. But who knows, maybe there are modeling opportunities for Jordan in North Carolina.