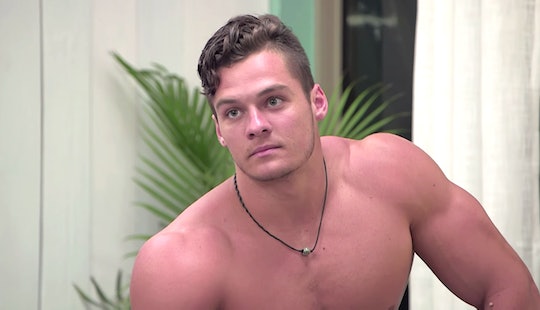 Jeremiah From 'Floribama Shore' Is Not A Floribama Native

Floribama Shore's Jeremiah Buoni came into the public eye when the reality show premiered last fall. The show is set in "Floribama," aka the area of Panama City Beach that stretches from the Florida Panhandle to Alabama. That being said, not all the cast members grew up in Floribama. And given his recent cross-country move, fans may be wondering where Floribama Shore's Jeremiah is from.

According to Life & Style, Buoni is from the town of Clermont, Florida, located in the northeast corner of the state. To confirm that Clermont is really Jeremiah's hometown, I did a little Insta-vestigating. (That's Instagram investigating, for the record.)

Jeremiah is 23, which means in 2014 he was 19, and most likely a recent high school graduate. ‌Based on Google Maps, Clermont is about a three hour drive from the The Amelia Island Club, meaning he likely relocated to the area after graduating high school. And then, a few years later, he moved to the Gulf Coast at Panama City Beach to be on Floribama Shore.

Jeremiah is likely a fan of living down south, considering he agreed to be in Floribama Shore. However, he just made a pretty big move. Based on his Twitter, Jeremiah is now permanently living in Scottsdale, Arizona.

Even though that's quite a big move for the 23-year-old, Jeremiah seems to be feeling pretty at home in Arizona, based on his Instagram. Both Jeremiah's brother Joshua and Jeremiah's Floribama Shore co-star Gus spend half their time in Arizona and the other half in Florida, according to their Instagram bios. The trio recently got together in Arizona, and Jeremiah shared a photo on Instagram to commemorate the hangout. "Arizona has been an amazing move and experience, but the one thing that makes it amazing is who you’re with," he captioned the shot. "I’m grateful to say that I have [Joshua] and [Gus] here with me! To Family!!!"

And it seems like the trio are thick as thieves. Based on their Instagram bios, they all have the same manager, Joey Fazio. If you put the four men's Instagrams side-by-side, you'll notice that they all formatted their bios the same way (can you say twins?). Additionally, Jeremiah, Joshua, Gus, and Joey are all partners in a new company called FitStrong, which sells dietary supplements for fitness enthusiasts, as per its website.

Floribama Shore viewers have been huge fans of Jeremiah since day one, and with the season finale around the corner, his storyline has a few loose ends to tie up. In last week's episode, which aired Sept. 10, Jeremiah got the news that his grandfather passed away, the blog CarterMatt reported. In the season finale, the whole crew goes out partying to try and take Jeremiah's mind off the sad news, according to TV Guide. However, the night goes awry when Nilsa gets drunk and picks a fight with Aimee. Tune into the finale on Monday, Sept. 17 at 10 p.m. ET to see how the season wraps up.