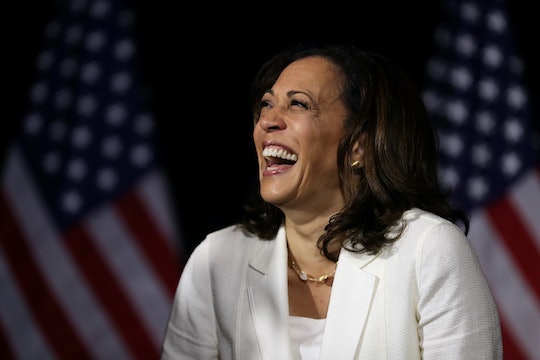 As the 2020 presidential election kicks into high gear, voters are becoming more and more curious about the candidates' stance on key, important issues as well as their own personal backgrounds. And as one frontrunner continues to make headlines while on the campaign trail, some may be wondering where Sen. Kamala Harris is from. As it turns out, the California Democrat hasn't strayed too far from home in the West Coast throughout her political career.

Harris was born in Oakland, California on Oct. 20, 1964, according to the presidential hopeful's campaign website. Harris is the daughter of her late mother Dr. Shyamala Gopalan, a breast cancer researcher from India, and her father, Donald Harris, a Stanford University economics professor from Jamaica, according to the African American Registry. In an Instagram post shared in May, Harris credited her mother for her drive. "My mother, Shyamala, is one of the biggest sources of inspiration in my life. She was fierce, strong, and taught me that I had a responsibility to speak truth and fight for justice," she captioned a childhood photo of them. Harris also has a sister named Maya Harris, who's been a "loyal confidant" in Harris' campaign, according to Politico.

The California senator has spent much of life and career in the Golden State. While Harris did spend some time on the East Coast for her education — she's a graduate of Howard University in Washington, D.C. — she went on to earn a law degree at the University of California, Hastings College of the Law, as noted on her campaign site.

In 2011, Harris made history when she was elected as California's attorney general, becoming the state's "first female, the first African-American, the first Asian-American" to hold the position as well as the "first South Asian-American attorney general in the nation," according to CNN. In 2017, Harris was sworn in as a U.S. senator representing California, according to KPBS, and holds that position today as she runs for president.

Throughout this presidential campaign, which will surely be full of tense moments, Harris undoubtedly has the support of her husband Douglas Emhoff and her stepchildren, Cole and Ella, who sweetly call her "Momala," according to the Oprah Magazine.

Harris also speaks sweetly of her family; for example, in an essay for ELLE in honor of Mother's Day, Harris wrote, "I can say one thing with certainty, my heart wouldn’t be whole, nor my life full, without them."

Throughout her career and her beginnings in California, it seems that Harris has always had a supportive family in corner.