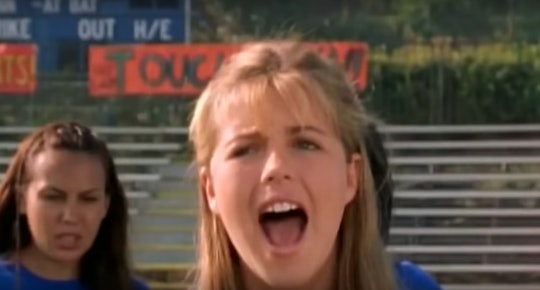 So When 'Lizzie McGuire' Comes Back Will Kate Saunders Also Return To Torment Her?

Unless you've been on a social media cleanse (good for you!) or under a rock, you probably know that Disney's former hit show Lizzie McGuire is returning to the new Disney+ streaming service set to launch Nov. 12. You literally cannot revive the show without Hilary Duff so I know she's returning. But I'm wondering where Kate from Lizzie McGuire is now because I don't know about you but I love stalking the popular kids from high school just to check if they're living their best lives like I am right now.

Ashlie Brillault played Kate Sanders, Lizzie's friend-turned-enemy and captain of the cheerleading squad. Throughout the series, Kate basically conspires to make Lizzie's life miserable (though they've reconciled a few times like in The Lizzie McGuire Movie). But I'm not so sure Lizzie will get a chance to explore that relationship further because Brillault is now a criminal defense attorney, according to her LinkedIn profile. More specifically, she's a partner at the Law Offices of David Givot. Partners don't tend to get much time off for their personal lives, let alone to make a cameo in the reboot of a much-beloved hit show from the Disney Channel.

It doesn't seem like Brillault is interested in the entertainment industry anymore, anyway. I learned per Entertainment Weekly (and just looking at her IMDb profile,) that she quit acting in 2004 when Lizzie McGuire first ended and went on to study law at The University of Denver. That's so admirable. I'm sure the spotlight can be bright and alluring but it's definitely not for everyone. It doesn't seem like Brillault needed even a second to dust herself off before picking a new focus when Lizzie McGuire ended. I stan a lady who knows what she wants and goes after it full-force.

I know nothing about law besides what I see on TV, so, I went on her firm's website to learn more about what she does every day. The firm was founded in 2008 by Givot, who is a former paramedic. They strive to be an "ally for regular, good people, and life-saving professionals who find themselves facing DUI, criminal, and/or administrative trouble."

I'm not a medical professional either, so it never even occurred to be that EMS providers could potentially face legal trouble just because of the nature of their jobs. They're out in the field trying to save lives, but that can get dangerous and sadly accidents and tragedies happen. Givot, Brillault, and their firm promises EMS clients they will "watch over you while you watch over the world," on their website. It sounds like such admirable, difficult work.

I don't know either way if Brillault wants to be on the new Lizzie McGuire show, but I don't blame her at all if not. Duff told People that the timing was right for Lizzie to "be there for women again." That's awesome and I can't wait. But Brillault has clients who need her right now for reasons that go beyond nostalgia.

The Lizzie McGuire revival is coming to Disney+, date TBA.