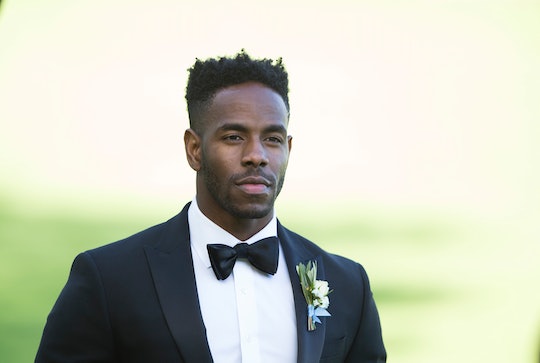 Lincoln has been winning hearts and minds since last season's "After the Final Rose" special, when he got to meet Becca as a special sneak preview of her season's upcoming contestants. And given his extremely dashing accent, fans may be wondering: where is Lincoln from? He's actually lived on the East Coast, the West Coast, and in the Midwest, but Lincoln is originally from Nigeria, according to his Bachelorette bio.

Lincoln first moved to Boston as a teenager and later attended the University of Kentucky. According to his LinkedIn profile, he then returned to Boston after college and eventually took a job at Oracle before moving to Los Angeles to continue working for the company. It was always a dream of his to live in California, Lincon's Bachelorette bio states, and he's finally made that dream come true with his home in Santa Monica (not to mention the Bachelorette mansion, which isn't too far away).

Lincoln was definitely an early favorite in the competition, to Becca as well as audiences. On the first group date, as is tradition, there was a friendly (if offensively tacky) competition hosted by Bachelorette alums Rachel Lindsay and Bryan Abasolo. Lincoln won a cheesy "ball and chain" race, and, as a prize, he got a little one-on-one time with Becca, along with a framed photo of the pair after the race as a keepsake. Unfortunately, he postured a little too much for one contestant's comfort and inadvertently started the season's first official feud.

After receiving the framed photo, Lincoln proudly put it on display for the whole group date to see when he rejoined the other guys. It rubbed Connor, a 25-year-old fitness coach from St. Petersburg, FL, the wrong way, and he threw the photo near the fireplace. Lincoln retrieved it and tried to put it back up again but that only prompted Connor to chuck it into the pool. The move was more than a little aggressive and Lincoln brought the issue to Becca, who assured him she would speak to Connor about it. She was actually pretty firm with Connor and let him know that it was "a little early for this, to be honest," which it most definitely was.

Of course, others thought Lincoln was being a little bit of a tattletale for "ratting out" Connor and making too big a deal of the incident (he wound up getting a little teary-eyed about the ordeal). But there's definitely no shame in crying when your feelings are hurt, and honestly, Connor's outburst seemed really aggressive for the reality of the situation. Also, not for nothing, but as we saw on Rachel Lindsay's season, it's not a great look to kick off your time on The Bachelorette as a white contestant by antagonizing a black contestant. Just like, read the room, dude.

However! There's another high-ranking member of Bachelor Nation who confirms that Lincoln is "drama, drama, drama." None other than Chris Harrison sounded the warning about him during his Facebook Live announcement introducing this season's contestants. (For what it's worth, he also hinted that Connor would be involved in a touch of drama early on.)

Ultimately, Lincoln is super attractive, extremely ripped, obviously charming, very worldly, and he has a hot accent. Along with his gregarious and extroverted nature, he's an easy guy for the of the guys to hate — especially ones who resent or suspect Lincoln's particular brand of slick put-togetherness. His true intentions aren't very clear to fans yet (although battle lines are already being drawn), so it'll be up to Becca to suss out whether he's one of the genuine guys who is truly there for the right reasons.