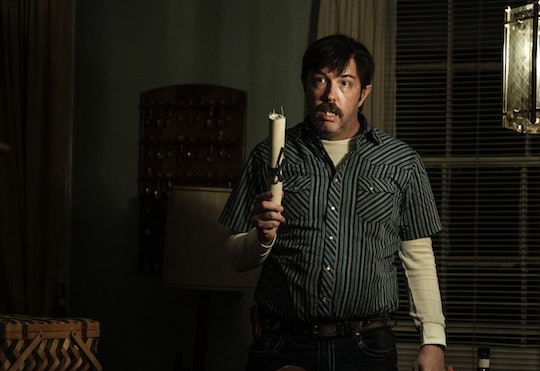 Here's Where Lyle Mitchell Is Now After The Infamous Prison Break

Escape At Dannemora, Showtime's methodical dramatization of the 2015 prison break at Clinton Correctional Facility, is starting to give fans a better glimpse of Lyle and Joyce "Tilly" Mitchell's relationship. Four episodes in, fans have seen their relationship dynamic play out over some dates gone sour, but viewers may be wondering: where is Lyle Mitchell now? Joyce, a former inmate supervisor, is currently serving time for facilitating the escape after becoming sexually involved with two inmates. And while Lyle briefly tried to distance himself from his wife, he quickly reversed his position to stand by her in full support.

Ben Stiller, who executive produced and directed the miniseries, attracted a lot of publicity for shooting the show on location in the real prison and surrounding towns where the story took place. But Mitchell wanted nothing to do with the series. When Stiller asked if he could film in the couple's real home, Mitchell turned him down, according to The Daily Mail. He also wouldn't speak with the cast or production team to give them any insight into the story — unlike David Sweat, one of the recaptured escapees, who spoke with the cast from solitary confinement.

Despite the fact that at one point, Sweat and his co-conspirator Richard Matt were planing to murder him as part of their escape plan, Mitchell continued to remain loyal to his wife, who was sleeping with both men. He still visits her in prison and after Joyce's most recent parole hearing, voiced disappointment that her punishment was so much harsher than that of Gene Palmer, another corrections officer who helped with the escape.

Some have pitied Mitchell for sticking by his wife through what appeared at times to be a brutal marriage. But Eric Lange, who plays Mitchell on Escape at Dannemora, told TV Line in an interview that he doesn't think Mitchell is as hapless as he's made out to be. Said Lange:

I’m sure he was aware of things here and there. To me, it was kind of hoping against hope this wasn’t actually happening, you know? Watching this train crash in slow motion… How I’ve always seen it was like he was probably smarter than many people give him credit for, and he’s probably a little in denial.

Stiller, Lange, and the rest of the production team behind Escape at Dannemora tried hard to paint Mitchell as complex and human, despite outside appearances. "I don’t think [Mitchell is] a doormat," Lange added. "I think the guy’s got real opinions."

Mitchell still posts photos of himself and his wife together on Facebook when he goes to visit her. But what the real story is only he can say. Escape at Dannemora airs Sunday nights on Showtime.