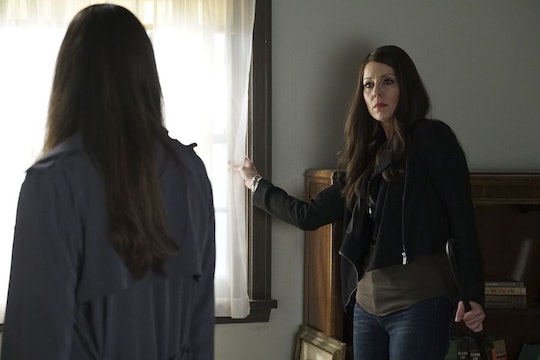 Mary Drake Was Missing From The 'PLL' Premiere

When I wasn't too busy fighting back tears about the fact that this is our very last Pretty Little Liars premiere ever, I was finding myself fully immersed in all the usual Rosewood drama. And while it was very nice to get an actual confirmation that Mary Drake is Spencer's biological mother, I couldn't help but notice that this particular character was MIA throughout the entire episode. So where is Mary Drake on Pretty Little Liars? Her absence is highly suspicious.

It only took a week for Spencer to recover from her gunshot injury because, this is Spencer Hastings we're talking about, and she wasn't about to let something as insignificant as a bullet take her down. But that left her with plenty of time to take Mary's words to heart. So as soon as Veronica Hastings returned home, Spencer confronted her with what she was told and demanded an explanation. But for once, this parental figure didn't try to lie her way out of the situation. She admitted to Spencer that she and Peter had adopted her from Mary in the hopes of giving her a better life. (Since Mary was in Radley at the time, Spencer would've been given away to strangers.) As you can imagine, this was a lot for Spencer to take in.

So you'd think now would be the best time for Mary to reappear and connect with her daughter who finally knows the truth after all this time, right? But she was nowhere to be found. Is this because she too has been abducted by A.D.? Fans saw Jenna drinking tea and reading all about the supposed "endgame" plan in braille, but what about Mary? Was she there, too? Or maybe she made herself scarce because she was the one who shot Spencer?

After taking a trip to the police station, the attractive detective informed her that Jenna's gun didn't match the one that had been used on Spencer, meaning there had been two guns at play that night. Maybe Mary had the other gun and has run away for fear of getting caught. Or perhaps this another one of A.D.'s tricks and Mary is simply being framed. Either way, it was weird that she wasn't around, though, I doubt that'll be the case for long.

Now that Spencer knows the truth, it's only a matter of time before she reunites with Mary and uncovers as much about her mother's background as possible. Because knowing Spencer, she won't rest until she knows the whole story and not even someone like Mary can hold her off for long.