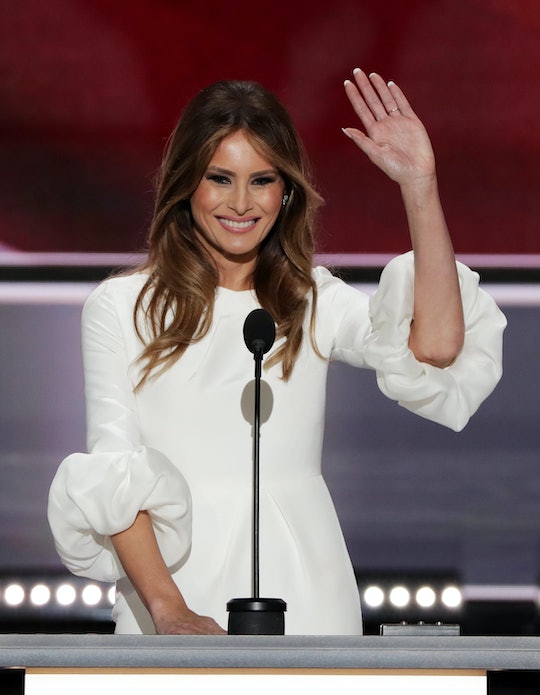 Where Is Melania Trump From? If Donald Wins, She Will Be The Second First Lady Born Abroad

As the Republican National Convention draws to a close — a contentious and, at times, heated affair at that — many are turning their attention back to the candidates themselves, Donald Trump and presumptive Democratic nominee Hillary Clinton. However, many eyes are still on Melania Trump, and have been since her now infamous RNC speech. But what do we really know about Melania? Where is Melania Trump from, and what is her opinion of her now-political hubby?

Melania Trump, formerly Melania Knavs and Melania Knauss, was born and raised in northern Yugoslavia, in the socialist republic (SR) of Slovenia, during the rule of Communist dictator Josip Broz Tito. According to People, during her childhood, Melania lived in a Communist-style apartment complex that overlooked a river and several smokestacks. However, when Melania was 16 she moved to to Ljubljana, the country's capital, for high school, and it was there she was spotted by a photographer. Shortly after, Melania began her modeling career, and by the time Melania was 18, she had signed a modeling contract with an agency in Milan.

However, according to her official bio page, Melania obtained a degree from the University in Slovenia first, in architecture and design. However, it should be noted that this has been disputed by other biographers, who say no record of her degree can be found. Her modeling then took her all over the world, including fashion hotspots Paris and Milan. Eventually, however, Melania ended up in New York, where she has lived since 1996 and where she met Donald.

According to The Week, Melania speaks five languages — Slovenian, English, French, Serbian, and German — and if Donald Trump does in fact win the presidency, Melania will be the second first lady born abroad. (The only first lady to currently hold that honor is Louisa Adams, the wife of President John Quincy Adams.)

However, just because Melania immigrated to the United States doesn’t mean she supports all immigration. In fact, in a January interview with Harper’s Bazaar, Melania revealed she does not support illegal immigrants because even though she came to America as an immigrant, she did so legally — and not only is that the right way, it is the only acceptable way:

And just one month later, Melania spoke with MSNBC about immigration and echoed a similar sentiment:

However, as Melania also explained in her Harper’s Bazaar interview, she isn’t just Trump’s “yes” woman:

Oh, and Melania hates that Donald is on Twitter. In fact, in interview with the Today Show, Melania revealed that the one habit she wishes he would give up is "the tweeting," according to The Week.