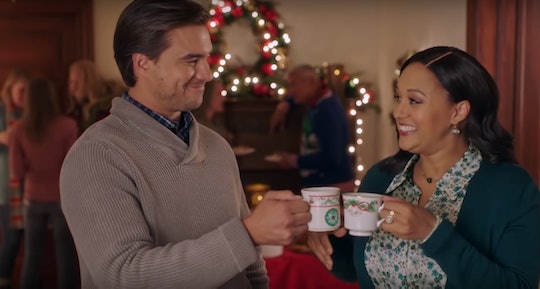 Lifetime's 'My Christmas Inn' Is Set In A Winter Wonderland

Lifetime’s My Christmas Inn might be another romantic TV Christmas movie, but it has the kind of story and setting to make it a fun watch over the holidays. It may feel like the somewhat unbelievable story of a successful ad executive inheriting an adorable inn has been told before, but it still has all of the magic that these holiday movies bring to the table. And from the trailer alone, you might be wondering where My Christmas Inn is set since the Lifetime movie seems to have authentic romantic scenery. That’s right — no fake studio sets and fake snow for this one. OK, don't quote me on the no fake snow thing, because you can always use more lightly falling snow for the almost-kisses in these kinds of movies.

The IMDB plot for My Christmas Inn says that Jen Taylor, played by Tia Mowry-Hardict, lives in San Francisco where her career is just about to take off. Then, her great-aunt dies and leaves her the family inn, which is located in a very Stars Hollow-esque town in Alaska. Not one to be put off by the distance or change in climate, Jen travels to the town to meet with an attorney who obviously turns out to be her soulmate.

If you were wondering why the scenery looks so picturesque, that’s because production on My Christmas Inn did their best to create the charming small Alaska town in Salt Lake City, Utah. It still makes for an authentic vision rather than the alternative, which could have been lots of overly fluffy fake snow on a sound stage alone.

This particular Lifetime movie might give Sister, Sister fans something more to look forward to other than seeing one half of the twin duo on TV. Since Mowry-Hardict and her twin sister Tamera Mowry-Housley found ‘90s TV stardom with Sister, Sister, it’s what they’ve been known for together. And My Christmas Inn is actually about to give Mowry-Hardict a mini reunion with two of her former co-stars. Tim Reid and Jackée Harry, who played her parents on the ‘90s sitcom, play relatives of hers in the Christmas movie. So it’s not an all out reunion exactly, but it will be a little extra treat for longtime fans.

It’s unclear what town in Alaska the movie is set in, but my guess is that it’s a fictional one designed for the purpose of My Christmas Inn alone. And Mowry-Hardict’s working relationship with Rob Mayes, who plays her love interest in the movie, probably helped set the tone. Mayes told Digital Journal that filming the Lifetime movie with her was nonstop fun and laughs. "She is one of the raddest people on this planet, and I mean it," Mayes said, of Mowry-Hardict. "She's had one hell of a career and I was so honored to get to work with her. She's super cool, so down to earth, so fun and funny. We just laughed and laughed. It's crazy that I get to call this work. It sure didn't feel like it."

As part of the network’s "It’s A Wonderful Lifetime" movie marathon, My Christmas Inn premieres on Lifetime on Nov. 21 at 8 p.m. ET. Although it might be reminiscent of a lot of other TV holiday movies, that’s part of the fun of it. You don’t watch marathons of romantic comedy Christmas movies on Hallmark or Lifetime to see the workaholic heroine with no time for love *not* fall for the unexpected mystery man dressed in the Santa costume. Just like eggnog and eating cookies until you need to switch out jeans for yoga pants, Lifetime Christmas movies are part of the holiday season. And now you can add My Christmas Inn to your list.