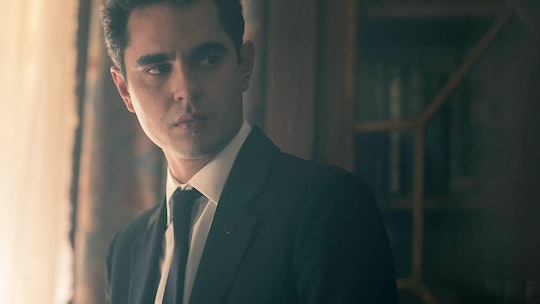 The first two seasons of The Handmaid's Tale introduced fans to a world of electrifying side characters. From Moira (Samira Wiley) to Emily (Alexis Bledel), it was always a delightful — and often terrifying — surprise to see storylines exist outside of June's (Elisabeth Moss) central narrative. However, the third season of the Hulu series has noticeably lacked in appearances made by minor characters, including Nick (Max Minghella). Seriously, every week, viewers are asking where Nick is on The Handmaid's Tale, and I don't blame them. The Waterford's former driver has been absent since Episode 6, but fans are hopeful he will come back in time for the Season 3 finale.

Thus far, Nick Blaine has only appeared in three episodes of The Handmaid's Tale Season 3. He briefly showed up in the first and third episodes, and the last time fans saw him was in the sixth episode titled "Household." In the episode, June discovered Nick played a role in Gilead's creation, leaving his loyalty and love for June up for debate. But fans didn't get a Season 3 arc to uncover the many layers behind Nick. Instead, he was promoted to Commander and sent away to fight in the front lines of the war in Chicago, and he hasn't been seen since.

With one episode left in The Handmaid's Tale Season 3, fans are wondering if Nick will return in the finale or if they will have to wait until Season 4. As of this write-up, there is no official news of a big comeback. But, in an interview with Den of Geek, Minghella revealed there's plenty left to unearth.

The actor also hinted there is more story to tell in the current season.

So if Minghella's statement holds up for the rest of Season 3, there's a chance viewers will see Nick again in the finale, and he will be playing a big part. That being said, it's still possible Nick's storyline will come up again next season, given the early Season 4 renewal.

If there's one thing I know about The Handmaid's Tale, it's that the show knows how to made a grand finale — cliffhangers and all. Now, as the third season comes to a close, loose ends are being tied up and prepped for what's to come next year. And with June plotting an escape for 52 children, fans wonder how Nick will fit into the narrative in upcoming episodes, whenever that may be.

The Handmaid's Tale airs Wednesdays on Hulu at 12 a.m. ET.