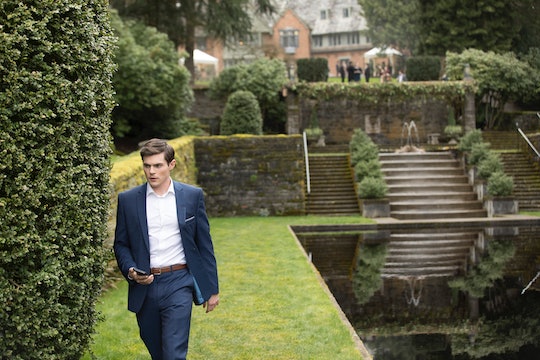 Pretty Little Liars: The Perfectionists premieres March 20 on Freeform, and it might be the spinoff of every PLL fan's dreams. By that I mean it's nothing like the network's first try — Ravenswood. Creator Marlene King learned from the spin-off's mistakes and seems to have deliberately turned back to the show's original formula. Not everything can be the same, though. For any spinoff to survive, it needs to plant its roots on new ground. Then a whole new flower can grow. Enough metaphors, you want to know where Pretty Little Liars: The Perfectionists is set, and I have answers.

Alison (Sasha Pieterse) and Mona (Janel Parrish) have moved from the fictional town of Rosewood (which you probably know is modeled after Philadelphia) to the fictional town of Beacon Heights, Oregon and the real-life inspiration for the set is Portland. But it gets better, because there was no LA soundstage involved in the filming of this show. Pretty Little Liars: The Perfectionists films on location in Portland. I don't think a show promising so much lying, cheating and probably murder can get any more authentic than that.

As King explained to The Oregonian the set seemed to fall right out of her dreams and into reality. “On our first trip up there to location scout, we went to Forest Grove, and we saw Pacific University,” she said. “It was exactly what we wanted, and the town was a picture perfect little town. I never got that out of my head. I was like, this is it, guys, this is what BHU is supposed to look like."

Picturesque towns are nice and all — but I'm more interested in the show's vibe. I'm not a big fan of ghosts, and Ravenswood was full of them. But two years isn't the longest break from a show, so something too close to the original Pretty Little Liars might be boring. According to an interview Parish did on set with Cosmopolitan, I have nothing to worry about. "I hope the fans of PLL who grew up watching the show will relate to this kind of new, mature version," she said. "It’s darker. It’s edgier. Things just feel a little bit more grown up. And it’s still just as juicy."

Well, that last part makes me a little bit anxious — but who is a PLL fan if not a glutton for the punishment of frustrating cliffhangers? Besides, despite the title of the show, the main message of The Perfectionists is that we all need to relax and stop giving in to the pressures of social media that are constantly present in this digital age, whether we know it or not. King says the characters on this show won't be as "hard on themselves." She wants viewers to understand that mistakes are a part of life. "If you fail, it’s not the end of the world," she said in The Oregonian.

I'm a little bit confused right now because it seems like the titles of the shows should flip flop. I don't condone lying (fun fact: I'm really bad at it.) But, doesn't it seem like perfectionists would be harder on themselves and liars would be a little bit less stressed? Ugh! The show already has me asking questions and I haven't even watched yet. But I am definitely ready to find out.